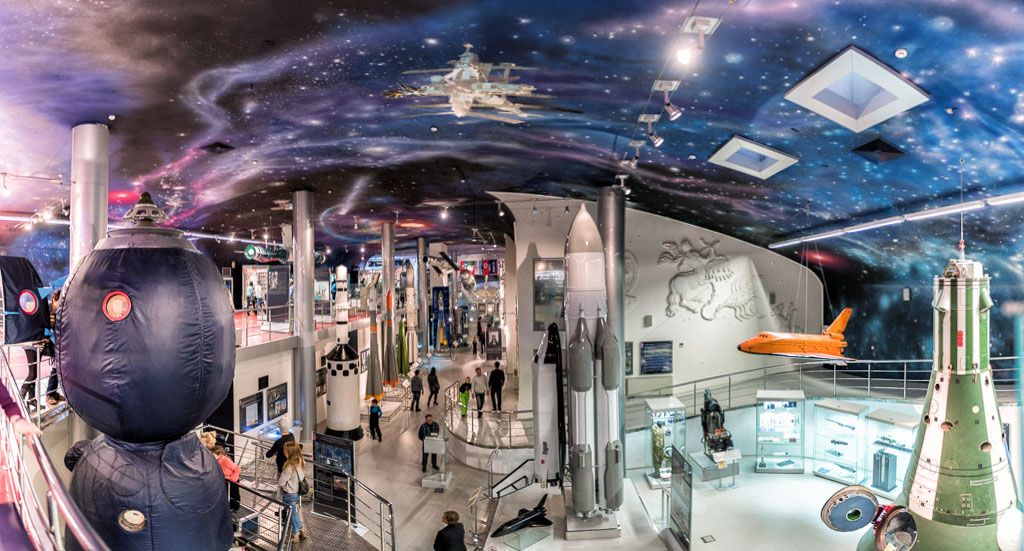 Amongst the many attractions of Moscow, the Museum of Cosmonautics (also known as the Museum of Astronautics or Museum of Space Exploration) is one of the easiest to spot from afar. That’s because the museum sits under the huge Monument to the Conquerors of Space. The monument actually predates the museum by a whopping 17 years, as the first was erected in 1964 and the latter opened only on April 10, 1981, to commemorate the 20th anniversary of the day Yuri Gagarin became the first human to orbit the Earth in space.

The monument is quite a sight in itself, but when I visited it was raining cats and dogs, so I couldn’t take any decent picture. Fortunately you can find some delightful historical (and present-day) ones right on the museum’s home page.

What you see today is not the “1981 version” of the museum, but rather the three times as large one that was inaugurated on Cosmonautics Day, 2009, after having virtually tripled its original size during three years of reconstruction. Today it displays some 85,000 different items, primarily from the Soviet period. One of the first you’ll see is a 1 to 1 replica of our planet’s first man-made satellite Sputnik 1 right in the entrance hall (called the “Introductory hall“). Did you know that the Internet itself was created in response to Sputnik, as a communication network that would continue working even if one or more of its nodes were bombed by the Russians?

Speaking of firsts, in the museum you can admire the actual Space capsule used by Yuri Gagarin and a number of other historically significant artefacts. But the museum is also enjoyable because of the very many scale models which explore the history of flight, astronomy, space exploration, space technology, and space in the arts. This also helps a great deal to enjoy your visit if you don’t speak much Russian (or any at all), as, truth to be told, there is very little explanation in English of what you are seeing, except the translation of names and brief descriptions of the objects, almost always devoid of any details.

You also get a chance of feeling like a cosmonaut (the Russian equivalent of an astronaut) by stopping by at the cafe in the museum and trying some of the dehydrated food or the meal-in-a-toothpaste-tube that make up the space explorers’ diet.

Would you like to explore Moscow and its museums with an English-speaking local that can help you better understand and get the most out of your visit? Then just get in touch with us and we can make it happen for you! 🙂

2 thoughts on “Museum of Cosmonautics, Moscow”