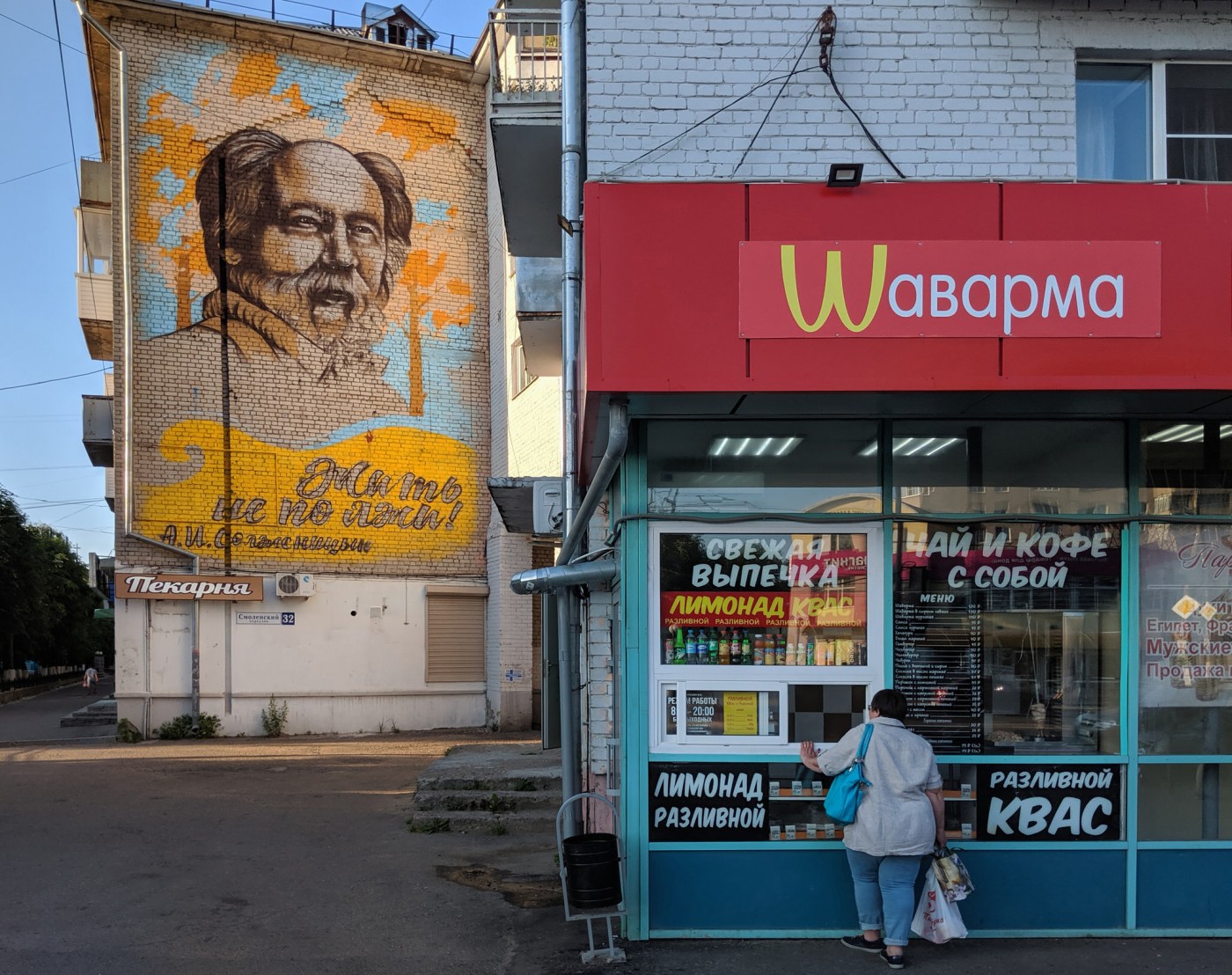 I stumbled by chance in this (at least to my eyes) very typical Russian scene. On the background you can see a large mural on the side of a house depicting the writer and Soviet dissident Aleksandr Solzhenitsyn with one of his famous quotes: “Live not by lies!”

This is actually the title of an article he wrote in 1974 (the year he was expelled from the Soviet Union) and that begins with the phrase: “At one time we dared not even whisper”. You can download the article here.

As you can see in the feature image of this post, the mural now lies (pun intended!) just a few meters away from “a lie”.

The shop on the corner sells Shawarma (also known as “Doner” or “Kebab”), but the Cyrillic spelling (Шаварма) substituted the initial letter “Ш” with an upside down Golden Arches, the logo of McDonalds.

To me there is a lot of “modern Russia” in this picture, in this juxtaposition.

There is, first of all, the very Russian (and laudable) habit of covering the otherwise ugly sides of buildings with large, artist-drawn graffiti, with positive or educational messages and/or notable Russian historical figures.

But there is also the “elasticity” of Russian laws when it comes to copyright and (foreign) intellectual property. While the main principle that “All are equal before the law” stands in Russia, in reality authorities tend to “leave alone” the “little guy” (much the opposite of what happens in other parts of the world!) and tend to persecute only when such actions would bring about a significant result (a large corporation would never be allowed such a blatant copyright violation!).

And there is the contrast that, to me, is always so present in Russian life (here you can find an example of what I mean: The Milk Truck) and in this case seems to represent the clash between the will to be inspired by a quote (live not by lies!) and the everyday “tricks” that seem to be necessary to attract customers and make your own small business survive.

There is also the acceptance of “Western symbols” that not only don’t cause any surprise any more, but can also be turned into “tongue in cheek plays on words” mixing logos, Latin and Cyrillic alphabets all together.