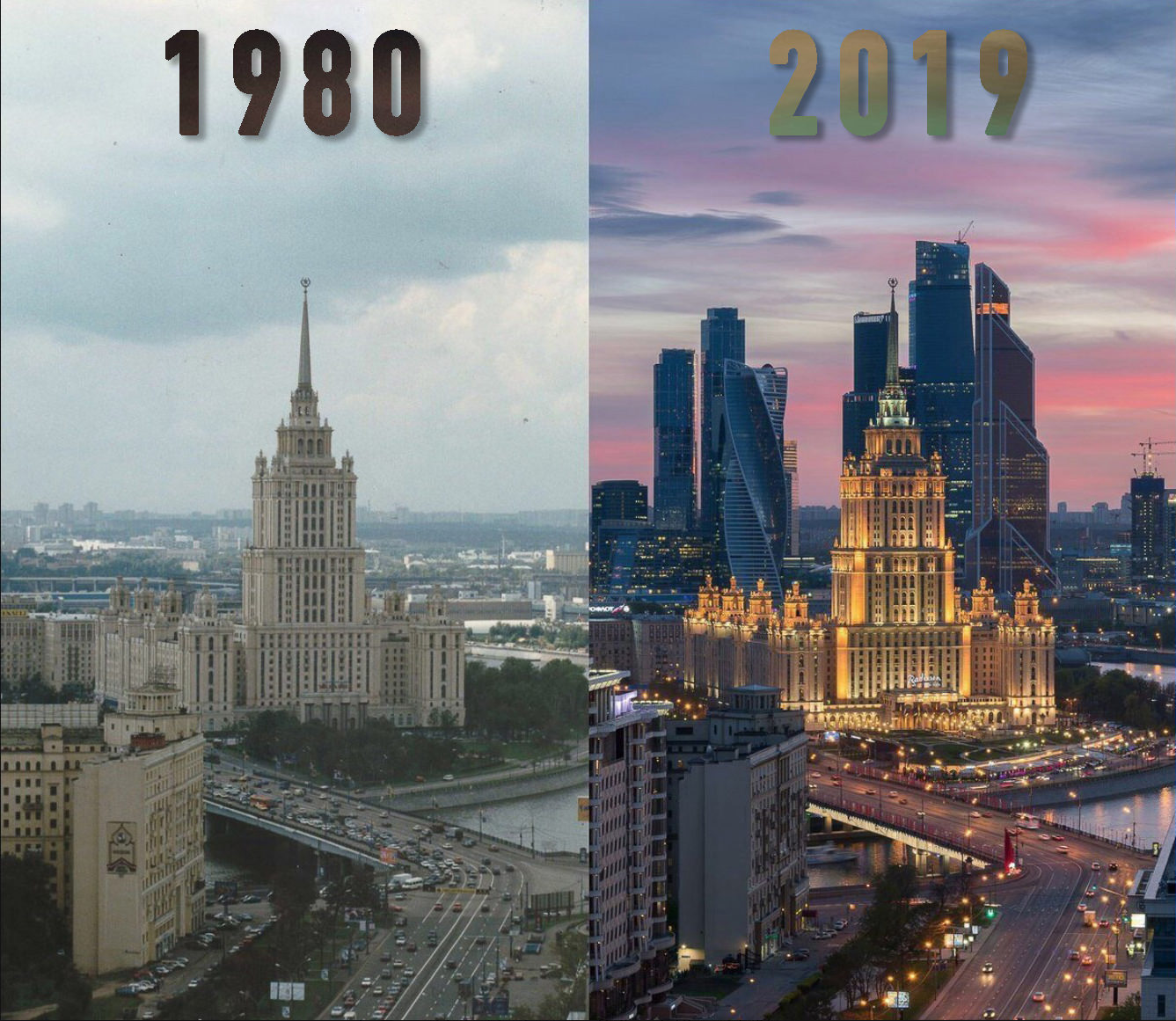 Today, June 12, is Russia Day. The day when the nation celebrates its independence, the beginning of a new era after the dissolution of the USSR in 1990. An independence gained without firing a single shot, quite a remarkable achievement.

Some shots were fired, but that actually happened a little over a year afterwards, in what came to be known as the August Putsch of 1991.

So today it’s Russia’s birthday and the Russian Federation turns 29. As it is often the case with birthdays, this can be an occasion to look back and see what one has achieved in life, so far.

When people think of an economic miracle, or an economic boom in the 21st century, the example that immediately comes to mind is that of China.

There is an image that exemplifies this growth more than any other and it is Shanghai’s skyline change in a span of 35 years.

Of course, in absolute terms the Chinese economic growth has no equal in the world, and Russia’s results are not comparable, by far. But this is also due to the fact that China’s population is over 1.4 billion, roughly 10 times as many people as Russia’s 146 million. Also in percentage points, the Chinese growth is simply unmatched.

But… there is a but. If you look not at the growth itself, but rather at the effect that that the growth has brought about, at the change it created in people’s lives, at the impact it had on international perception of the country… well, in that case Russia’s economic growth is definitely comparable to that of China.

I have not been able to find two images of the exact same years, but rest assured that the one on the left could have easily been shot in 1987… or in 1990 or even in 1997 for that matter.

The Russian economic miracle starts laters and it begins as a sort of rebound after a horrible decade of crime, corruption and government inability to, well, govern at all.

When I moved to Russia, one of the first cultural shocks I experienced was the radically different perception that Russians have of Yeltsin and, especially, Gorbachev, compared to how they are views “in the West”.

The reason, I came to understand, is dictated by a different perspective. The “West” sees these two people as the “heroes” that together have brought an end to the Soviet Union in a most peaceful matter, ending the (at least perceived) threat of a nuclear holocaust in case of war between the two superpowers. In simple words, they look at what came BEFORE them.

Russians remember more what came AFTER. As mentioned, the first years of the Russian Federation after the dissolution of the USSR were no walk in the park. Not by a long shot.

Russia in the 1990s is the dangerous dreary country that we still tend to associate to the idea we have of post-communist Russia, as it is the one portrayed in most, if not all, American movies, where the Russians had ceased to be the “red menace”, but still remained the baddies. An example is 1995 James Bond’s movie Golden Eye. The fact that one of the greatest and most internationally acclaimed Russian produced films of the last years, Leviathan, still portrays the Russian government apparatus (at least at a regional level) as corrupt, power hungry, criminal and colluding with the judicial system, certainly doesn’t help the perception of a changed society.

Long story short, Russians don’t value Yeltsin and Gorbachev for what they ended, but for what they brought about. And they loath them for it.

In the graph above (click to see it larger and easier to read) you can see what happened.

Already in 1990 Russia was suffering the failure of Gorbachev’s economic reforms, the (in)famous Perestroika, and the situation soon turned from bad to worse, exacerbated by the fact that people believed (and mostly were promised) a new prosperity, a consumeristic (and comfortable) way of life that for the first decade never came to be.

In 1990 the Economy was shrinking by 3% a year and two years later it had already precipitated to -14.5% . Times were bad. really, really bad. But the worst was yet to come.

Not only the money was scarce, but it got quickly and violently funneled in the hands of an elite few. There were the years when most of the Russian oligarch established their immense fortunes (and power).

Then, on 17 August 1998, the financial crisis hit with all its strength. The Russian government and the Russian Central Bank devaluated the ruble and defaulted on its debt (declared a moratorium on repayment of foreign debt). Russian inflation in 1998 reached 84 percent: millions of Russians lost everything they had, at least everything they had saved in banks or liquid assets. They were left with their house only (if they weren’t renting) and pensioners found that their pension was not enough to buy the most basic food or necessities.

If you think that on 23 March of that same year Yeltsin had named Energy Minister Sergei Kiriyenko, then 35 years old, as acting prime minister, you can start to see how the man is not so liked in Russia… By 1 August 1998 there were approximately 12.5 billion US Dollars equivalent in debt owed to Russian workers.

To give you an idea of how little in control the government of Russia was, suffice to say that s $22.6 billion International Monetary Fund and World Bank financial package had been approved on 13 July 1998 to support reforms and stabilize the Russian market, but it was later revealed that about $5 billion of these loans were actually stolen upon the funds’ arrival in Russia on the eve of the meltdown.

The Russians often say that “the only good thing that came out of the crisis and Boris Yeltsin is Vladimir Putin”. While one may argue that correlation does not imply causation, the numbers are pretty self-evident.

This is the same graph as above, but let’s now focus on the “green years”. For almost a decade Russia’s economy outgrew that of most countries. The red line is the economic growth of the USA as a reference.

This came mostly, if not almost exclusively, from internal reforms, as for instance in 2001 the oil price (now a strong indicator of the Rouble exchange rate) decreased by over 25%.

So, after a decade of suffering, the 2000s saw Russia’s promise of newly found prosperity at least partially fulfilled. And this time the most significant difference was that this time the new wealth benefitted pretty much every social class.

Of course, there are still social inequities in Russia today, but the 2000s saw an increase in the quality of life of poor and rich people alike. If the latter could then access international luxury goods (just look at the number of expensive cars in Moscow!), the former could regain a dignified existence and benefitted from the almost complete eradication of crime. Even if they are still of very modest amount and often barely enough to survive, even pensions grew steadily allowing old people to once again get out of extreme poverty, homelessness and denutrition.

In a way, in an economic perspective, we could go as far as to say that Russia doesn’t turn 29, but rather 19. Old enough to order a drink and celebrate a well-earned achievement.

The feature image of this post shows the famous Hotel Ukraina, commissioned by Joseph Stalin and the tallest hotel in the world for about 20 years, from the day it opened its doors on May 25, 1957 to 1976.

In the picture on the left, behind it, on the other side of the Moskva river, there is nothing more than a former a stone quarry and industrial zone, where most of the buildings were old factories that in time had been closed or abandoned.

Then from 2001 on a series of skyscrapers started to appear and give rise (in the literal sense of the term) to what is today known as Moscow City, even if the real name of the new development is Moscow International Business Center or MIBC.

Today we can definitely say that Moscow City is for Moscow what Lujiazui is for Shanghai.

But more importantly (and this is much, much, less perceived outside of Russia), the MIBC has a relevance that goes beyond the national borders and it is by far the most important skyscraper development in the whole of Europe. The MIBC includes 6 skyscrapers with maximum height of 300 meters or more (Shanghai has 5, Hong Kong has 6, Chicago has 6, New York has 8). Europe’s second tallest building, the Federation Tower, is in the MIBC. The complex also includes the third-tallest, fourth-tallest, sixth-tallest, seventh-tallest, and eighth-tallest buildings in Europe. By 2016 twelve of twenty-three planned facilities of MIBC were already built.

In case you were wondering, the tallest building in Europe is not London’s Shard. It is not in London, in fact, nor in any other part of England, Germany, France. It is Gazprom’s Lakhta Center in Saint Petersburg, Russia. Of course.

2 thoughts on “The Russian Economic miracle”