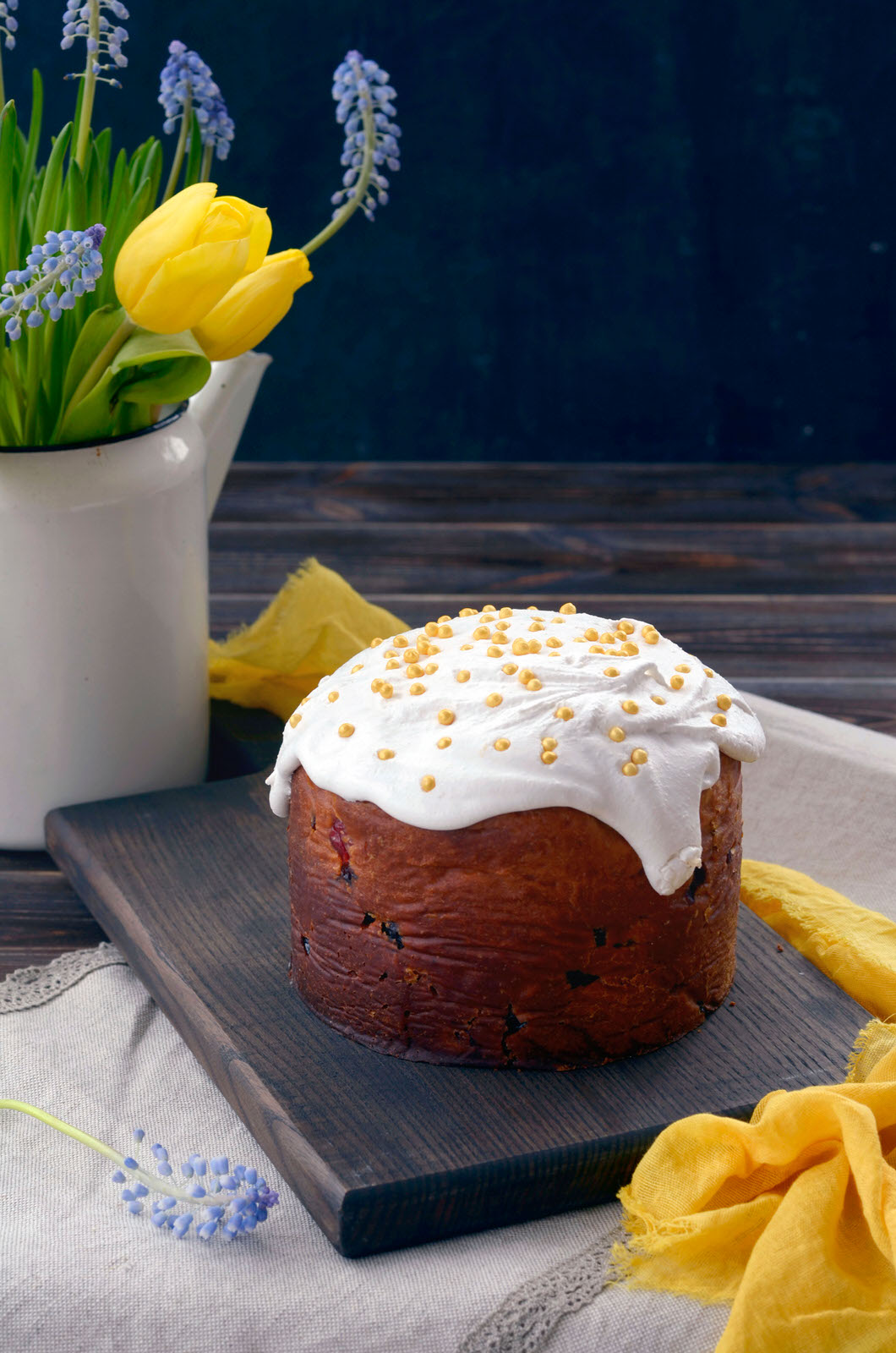 Easter is a very important celebration in Russia, arguably even more important than Christmas!

In Russian Orthodoxy and Eastern Christianityin general, the spiritual preparation for Easter begins with Great Lent, which starts on Clean Monday and lasts for 40 continuous days (including Sundays). The last week of Great Lent (following the fifth Sunday of Great Lent) is called Palm Week, and ends with Lazarus Saturday. The Vespers which begins Lazarus Saturday officially brings Great Lent to a close, although the fast continues through the following week. After Lazarus Saturday comes Palm Sunday, Holy Week, and finally Easter itself, and the fast is broken immediately after the Paschal Divine Liturgy.

What you see in the feature image is Kulich. It  is a Russian and Orthodox Easter bread that has its roots in the Byzantine Empire. It is only eaten between Easter and Pentecost.

The recipe for kulich is similar to that of Italian panettone, but Kulich is baked in tall, cylindrical tins (like coffee or fruit juice tins) and then, when cooled, it is decorated with white icing (which slightly drizzles down the sides) and colorful flowers. Historically, it was often served with cheese paska bearing the symbol XB (from the traditional Easter greeting of Христос воскресе, “Christ is Risen”).

There is, of course, another very important Russian tradition when it comes to Easter: Easter eggs, in particular the world famous Imperial Easter eggs that the House of Fabergé made for the Tsars starting in 1885.

That year  Tsar Alexander III commissioned the House of Fabergé to make an Easter egg as a gift for his wife, the Empress Maria Feodorovna. Its “shell” is enamelled on gold to represent a normal hen’s egg. Hence the Imperial Easter egg tradition was born.

Today you can admire the world’s largest collection of these masterpieces in the Fabergé Museum in Saint Petersburg (read more in this post, with a handy photo-tip!)

But do you know where the tradition of Easter eggs comes from? I think it is a remarkable (true) story.

During the second-century, Christian missionaries among the Teutonic tribes north of Rome encountered many pagan religious practices. When possible, they tried not to interfere with rooted customs, ingeniously transforming them into ceremonies that were in harmony with the Christian doctrine.

The reason for doing so was very practical. Converted followers who publicly took part in a Christian ceremony, at a time when no one else was celebrating, represented an easy target for persecution. If, on the other hand, a Christian ritual took place on the same day as the pagan ones, observed for some time, and if, above all, the two customs of worship did not differ too clearly, the new followers could save their lives and thus convince new followers.

It was precisely in this manner that the feast of Easter was born. Christian missionaries cleverly observed that the Saxon festival celebrated for hundreds of years and dedicated to Eostre, the pagan goddess of spring and fertility, coincided with the time of year when they celebrated the miracle of Christ’s resurrection. Therefore the Resurrection was disguised under the protective name of Eostre, which later turned into Easter, a trick that avoided the death of many Christians.

Even the fact that a rabbit, or more precisely a hare, has become one of the symbols of this festival, can be traced back to the pagan goddess. According to legend, Eostre (or Ostara), one day in late winter, while walking in a forest, among whose trees the frost still reigned, noticed a bird that could not fly. She then thought of turning it into a hare (unlike the kit -baby- of rabbit, those of hare are born with fur), so that the baby could survive the last days of cold that preceded the milder days of spring.

Even if transformed, the animal continued to lay eggs which, from that moment, were tinged with the colors of the rainbow, in honor and thanksgiving to the goddess. From here, the hare, then the rabbit and then the eggs, have become the symbols par excellence of spring and Easter, the world over.