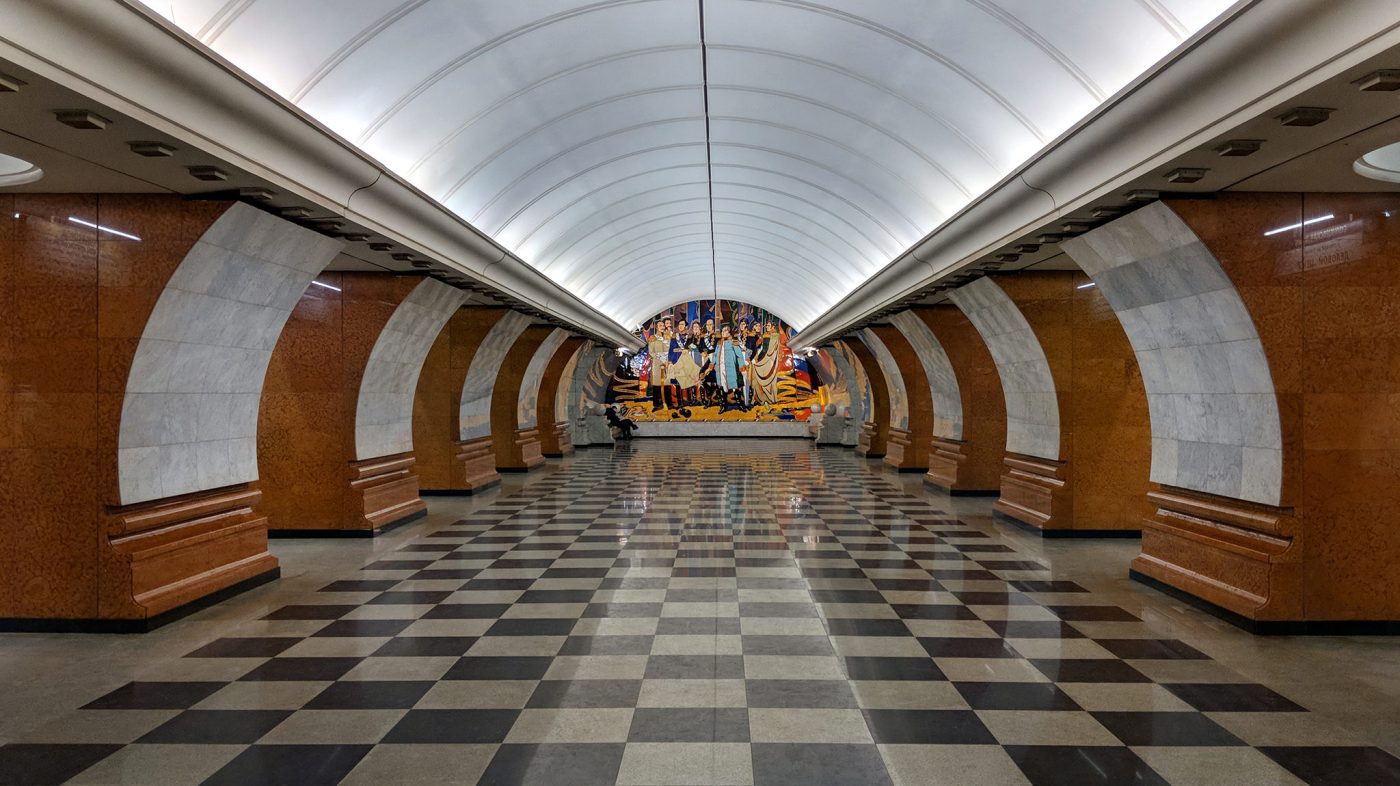 Deep, deep under the Victory park (Park Pobedy in Russian) on Poklonnaya Hill, lays’s Moscow Metro‘s deepest station. At 84 meters underground, according to the official figures, it is the deepest metro station in Moscow and and the third deepest in the world by mean depth, after Kiev Metro‘s Arsenalna and Saint Petersburg Metro‘s Admiralteyskaya, and the very deepest station by maximum depth, 97 m.

The Park Pobedy metro station also contains the longest escalators in Europe, each one is 126 meters long and has 740 steps. The ride to the surface takes approximately three minutes. Remember that in Russia each elevator has two “virtual lanes”: you can stand on the right and use the left part of the elevator only for walking and “passing” other people.

Construction of the station began in 1987, but five years later all work was stopped for lack of financing. It was resumed in 2000 and the station finally opened in 2003, when it became Moscow’s 165th metro station (at the end of 2017 the total number of stations was 244, 207 excluding the Moscow Central Circle and Moscow Monorail)

In 2003, the opening ceremony, timed to coincide with 58th anniversary of victory in the Great Patriotic War of 1941-1945, was attended by the then Moscow Mayor Yuri Luzhkov, who said that the new station was being commissioned to make it easier for war veterans and all city residents to reach the Poklonnaya Gora Hill, “a place sacred to the entire nation”. “The station is majestic,” he said, “worthy of the memory of our war heroes.”

Design wise, this is the only Moscow metro station where all passengers board and alight trains in different locations. There are two platform: a southern, or inbound, one and a northern, or outbound, one. The two platforms are of identical design but have opposite color schemes. The pylons of the outbound platform are faced with red marble on the transverse faces and pale grey marble on the longitudinal faces. The inbound platform(pictured on top of this post) is exact the reverse. The station is adorned with two large mosaics by Zurab Tsereteli depicting the 1812 French Invasion of Russia (at the end of the inbound platform, which you can see in the feature picture of this post) and World War II (on the outbound platform).

Not only these are the two historical “patriotic wars” of Russia, when the enemy first invaded the country and was then defeated and then driven away, but they also both have a connection with the Poklonnaya Hill above the station. Historically, the hill had great strategic importance, as at 171.5 meters, it was one of the highest spots in Moscow and it commanded the best view of the Russian capital. Its name is derived from the Russian for “to bow down”, as everyone approaching the capital from the west was expected to do homage here.

During the French invasion of Russia in 1812, it was the spot where Napoleon in vain expected the keys to the Kremlin to be brought to him by Russians (hence the first mosaic). n the 1960s, the Soviet authorities decided to put the area to use as an open-air museum dedicated to the Russian victory over Napoleon. The New Triumphal Arch, erected in wood in 1814 and in marble in 1827 to a design by Osip Bove, was relocated and reconstructed here in 1968.

In 1987, at the same time when the construction of the metro station begun, the hill was leveled to the ground and in the 1990s an obelisk was added with a statue of Nike and a monument of St George slaying the dragon, both designed by the same Zurab Tsereteli who also created the metro station mosaics. The obelisk’s height is exactly 141.8 metres (465 ft), which is 10 centimeters (3.9 in) for every day of the War. A golden-domed Orthodox church was erected on the hilltop in 1993-95, followed by a memorial mosque and the Holocaust Memorial Synagogue. 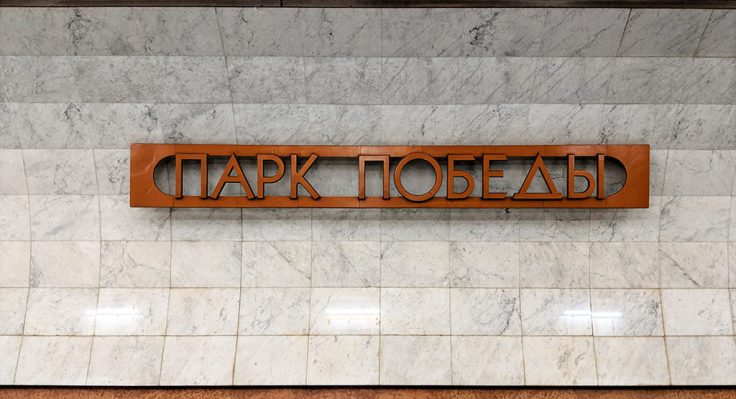 A little curiosity: as every station in the Moscow Metro, Park Pobedy announces its name with a unique, specific font (I talked about in the post Steve Jobs, the Macintosh and the Moscow Metro), but this time the whole name is transformed in a logo.

One thought on “The deepest Metro station in the world”