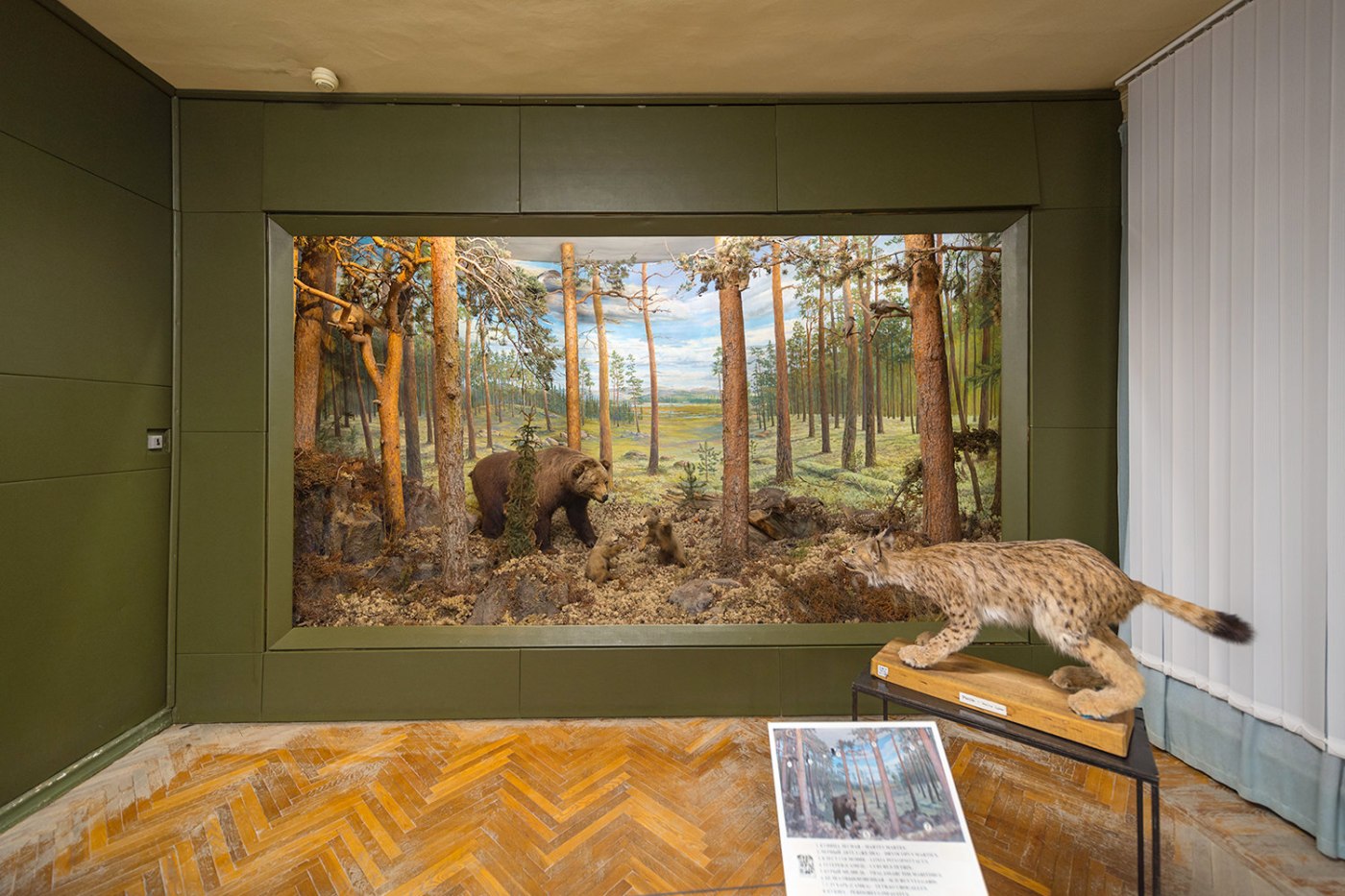 Even though it spans three floors, it is not a particularly large museum. Nor it is nearly as spectacular or as rich as the museums you can find in Moscow or Saint Petersburg. But is it worth a visit? Absolutely! And here is why.

First of all, it is located on Lenin Avenue (Prospekt Lenina, 90) and, therefore, very close to the city center. It is really cheap to visit (in 2018 the entrance ticket was 150 Rubles or 2,25 Euros or 2.5 USDs with a surcharge of 50 Rubles – 75 cents – if you want to take pictures). There is a lot of information about regional flora and fauna,  about the people who lived in the area since the stone age and about the 100-year history of Murmansk itself.

All this is nice and well, but the real reason to visit the museum, I think, is another one. To me this is both a sort of a time capsule and a strong evidence of how in Russia past and present coexist seamlessly.

To illustrate this point I will focus on the floor dedicated to local wildlife.

The whole floor is a long series of cordoned-off dioramas with stuffed animals. As you can see in the opening image of this post, there is also very scarce information about these animals. For instance it says that the bear in the diorama is a bear. Full stop. What more would you want to know? There is a big stuffed bird hanging from the ceiling, but no explanation to be found anywhere about what bird that might actually be. I am guessing an eagle and my guess is as good as yours (unless you are an ornithologist!).

The artists who created these displays tried their very best to recreate a believable scene, in spite of the watercolor painted backdrop, but I have seen more like-life teddy bears in toy stores (and, unfortunately, I might add, I think all these are actual animals, hunted down and stuffed 50 or 60 years ago).

When you get to the bird section, it becomes almost grotesque as the papier mâché rocks are almost as tall as the room ceiling and, therefore, all the birds atop them have to either duck (pun intended) or crouch. Judging from the sorrow state of the pavement, this has to be a very popular room, though.

The last room on the floor contains a very large, and largely empty fake aquarium, the likes of which I had not seen in a very, very long time.

Now, I’ve already poked enough fun at this museum. The truth is, I find it fascinating that one of the main museums in Murmansk, a city of over 300.000 inhabitants (and they were close to half a million in 1989) remained so completely unchanged for all these years.

The museum was founded as early as 1926 and it was then completely renewed and restored after WWII. I am guessing that has been the last major overhaul. If you, like me, are over 40, you probably still remember (some) museums being like this one when you were a child. Especially the choice of colors is, I think, rather telling, with muted olive green, gray and light blue being by far the predominant ones. Elsewhere museums have been “modernized”, they’ve become more interactive, with explanations about why they are displaying things rather than just a short description of what they are. But not here.

Elsewhere museums started to try to appeal to a broader, more international audience by inserting (at least some) explanations in English. But not here. Here everything is in Russian, and in Russian only.

To me this museum could be a veritable time capsule, sealed well over 50 years ago and re-opened every day for visitors to enjoy.

But, there is a but. As I mentioned in the title of this post, this is also an example of how past and present coexist in today’s Russia.

Let’s go back to the “bird hall”. If you look under the studded bird, you will see a QR code.

Of course, there is no explanation of what it is or what it does, but if you are brave enough to point your smartphone at it and scan it, voilà!, you are taken to a website page with lots more information about the bird. In this specific case, should you be both fluent in Russian and interested to know more about the Phalacrocorax Carbo (and who wouldn’t be?), this is the link it points at:
http://w.maugry.ru/?id=e8d0c109-94fe-4ef5-a131-779c8d0269dc

All joking aside, I find it very telling of Russian contemporary culture the way that the museum chose to invest its money in a cooperation with a web service content agency (in this case “Maugry Guide”) rather than, say, restore the worn-out flooring.

I must also admit that, were I in the museum director’s shoes, I would have in all likelihood made the exact same choice. And I am starting to wonder if that means that I’ve already lived in Russia too long…. Would you have made the same choice? I would love to read your answer in the comments below!

On a final note, I had no idea at the time I took this picture, but apparently this stuffed bird is significant enough to reside on the homepage of the museum website (again, no English, sorry) and it makes me a bit proud that my shot is so much sharper than the one they used… :D.

Would you like to discover the Russia that foreigners rarely, if ever, get to see, with an English (and Italian, Spanish and French) speaking photographer (me and my wife) showing you the sights and telling you a bit about Russian history and traditions, while helping you to improve your technique and take home some spectacular images of the largest country on Earth? If so, do get in touch and we’ll be happy to create an unforgettable, tailor-made experience for you!