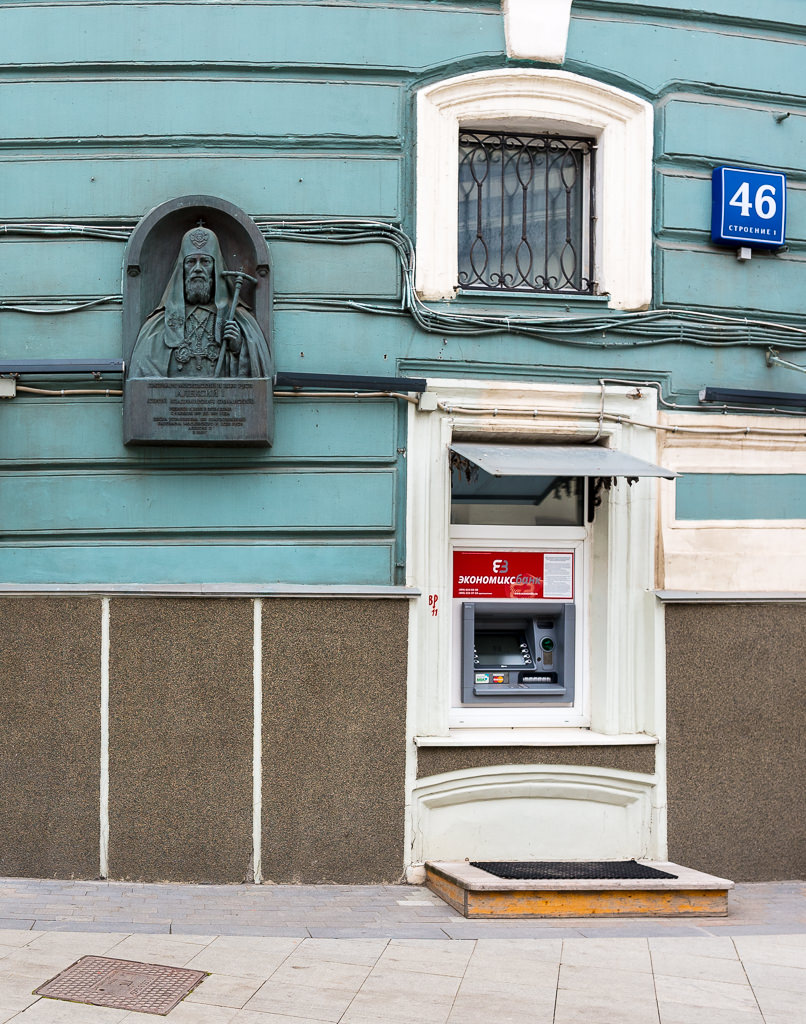 This 1964 Bob Dylan song seemed appropriate to illustrate how in just one picture you can see how much things have changed in Russia since the time of the Soviet Union. In a seemingly insignificant corner (even if it is in fact a round corner) of a Moscow street we see two elements that symbolize as many profound changes in Russian lives.

The first is the ATM machine on the right. ATMs were invented in the mid Sixties and by the end of that decade they started quickly spreading in the West, becoming a familiar sight by the 1970s. In the Soviet Union, however, they never existed. First of all for over 60 years there was only one State bank, Gosbank, which didn’t provide check books and much less ATM machines. It was only as part of Mikhail Gorbachev‘s  perestroika program, that other banks were formed, including; “Promstroybank” (USSR Bank of Industrial Construction), “Zhilstoybank” (USSR Bank of Residential Construction), “Agrobank” (USSR Agricultural Bank), “Vneshekonombank” (USSR Internal Trade Bank), and “Sberbank” (USSR Savings Bank). “Sberbank” continues to this day as one of Russia’s largest banks and according to its own website it was the first financial institution to introduce ATMs in Moscow in 1993 (link in Russian), but that was already two years after the dissolution of the USSR.

The second element of the picture that stands as a testament to the profound change in the “state-citizen relationship” is the religious icon on the left. The USSR was in fact one of the first communist states to proclaim, as an ideological objective, the elimination of religion and its replacement with universal atheism.

The immediate period following the establishment of the Soviet state included a struggle against the Orthodox Church, which the revolutionaries considered an ally of the former ruling classes. In Soviet law, the “freedom to hold religious services” was constitutionally guaranteed, although the ruling Communist Party regarded religion as incompatible with the Marxist spirit of scientific materialism. In practice, the Soviet system subscribed to a narrow interpretation of this right, and in fact utilized a range of official measures to discourage religion and curb the activities of religious groups. In the period from 1922 to 1926, 28 Russian Orthodox bishops and more than 1,200 priests were killed. Both Christian and non-Christian establishments were shut down by the thousands in the 1920s and 1930s. By 1940, as many as 90 percent of the churches, synagogues, and mosques that had been operating in 1917 were closed. And by “closed” it is often meant that they were completely demolished with explosive, such as the case in 1931 for the Christ Saviour Cathedral in Moscow. Then followed a period of “truce” when Soviet religious establishments overwhelmingly rallied to support the war effort during the Soviet war with Nazi Germany. Amid other accommodations to religious faith after Nazi Germany attacked the Soviet Union, churches were reopened, Radio Moscow began broadcasting a religious hour, and a historic meeting between Stalin and Orthodox Church leader Patriarch Sergius of Moscow was held in 1943. Then again the Soviet establishment under General Secretary Nikita Khrushchev‘s leadership clashed with the churches in 1958–1964, a period when atheism was emphasized in the educational curriculum, and numerous state publications promoted atheistic views. During this period, the number of churches fell from 20,000 to 10,000 from 1959 to 1965, and the number of synagogues dropped from 500 to 97. The number of working mosques also declined, falling from 1,500 to 500 within a decade.

In spite of all this the religious belief has been an integral part of the Russian culture for over 10 centuries and the flame of individual faith remained alight even in those conditions. A poll conducted by Soviet authorities in 1982 recorded 20 percent of the Soviet population as “active religious believers.” It was with the fall of the USSR, however that religion (Christian, Jewish and Islam alike) could again flourish, reconstruct religious buildings and display their symbols and icons.

Currently, there is no official census of religion in Russia, and estimates, which are based on surveys only, vary enormously. In 2012 the research organization Sreda published Arena Atlas, a detailed enumeration of religious populations and nationalities in Russia, based on a large-sample country-wide survey. They found that 46.8% of Russians declared themselves Christians. The most recent Pew Research Center finding was that in 2015 71% of the population of Russia declared itself Eastern Orthodox. The truth is most likely somewhere in between these two figures, but it is safe to say that today people in Russia can again choose not only their faith, but wether to publicly display it or not, without fear of persecution or repercussion for doing so.