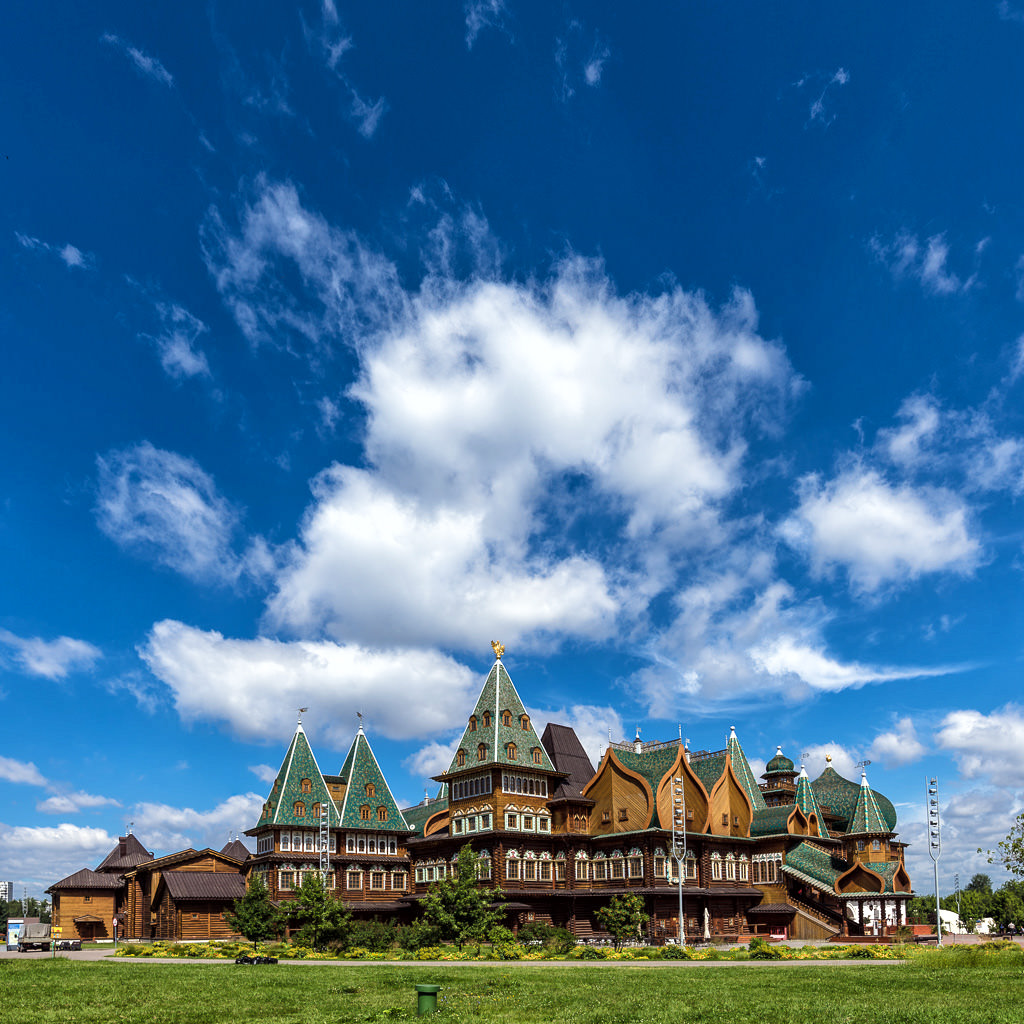 Today Kolomenskoe is one of the most beautiful parks within the city of Moscow. Besides being a wonderful place for a peaceful stroll, it also boasts a very rich history.  The Kolomenskoye village was first mentioned in the testament of Ivan Kalita (1339). As time went by, the village was developed as a favourite country estate of grand princes of Muscovy.

One of the main sights in the park is the Grand Palace of Kolomenskoe (pictured above). In 1667 Tsar Alexis I had all the previous wooden structures in Kolomenskoye demolished and replaced them with a new great wooden palace, famed for its fanciful, fairytale roofs. Foreigners referred to this huge maze of intricate corridors and 250 rooms, as ‘an Eighth Wonder of the World’, also because the entire palace was built without using any fasten materials, nails or hooks. It consisted of 26 buildings connected with each other by passages and halls.  The whole complex was divided into male and female parts. The male part included ceremonial chambers, chambers of the Tsar and of his sons, while the female part belonged to the Tsarina and to the Tsar’s daughters.

Although basically only a summer palace, it was the favorite residence of Tsar Alexis I. The future Empress Elizabeth Petrovna was born in the palace in 1709, and Tsar Peter the Great spent part of his youth here. Upon the departure of the court for St. Petersburg, the palace fell into disrepair, so that Catherine II refused to make it her Moscow residence. On her orders the wooden palace was demolished in 1768, and replaced with a much more modest stone-and-brick structure.

Fortunately, detailed plans of the Alexis I palace survived. The Moscow Government has completed a full-scale reconstruction in 2010. The rebuilt palace stands approximately 1 kilometer (0.62 mi) to the south of its original location near the White Column, in order to preserve the historic foundations. The palace erected by Catherine the Great in 1768 was demolished in 1872, and only a few gates and outside buildings remain. During the early Soviet period, under the initiative of architect and restorer Pyotr Baranovsky, old wooden buildings and various artifacts were transported to Kolomenskoye from different parts of the USSR for preservation, so currently Kolomenskoye Park hosts an impressive set of different constructions and historical objects.

The palace is well worth a visit, at least to admire its architecture from the outside and to freely wonder in the many inner yards between the various building. For those who have a little more time to spend, inside there is a museum where visitors can see the every day life of the Tsar’s family.

The whole Kolomenskoe park is rich with historical buildings and one visit might not be enough to admire everything it has to offer:

Constructions and artifacts brought from elsewhere

One thought on “The Palace Without a Single Nail”