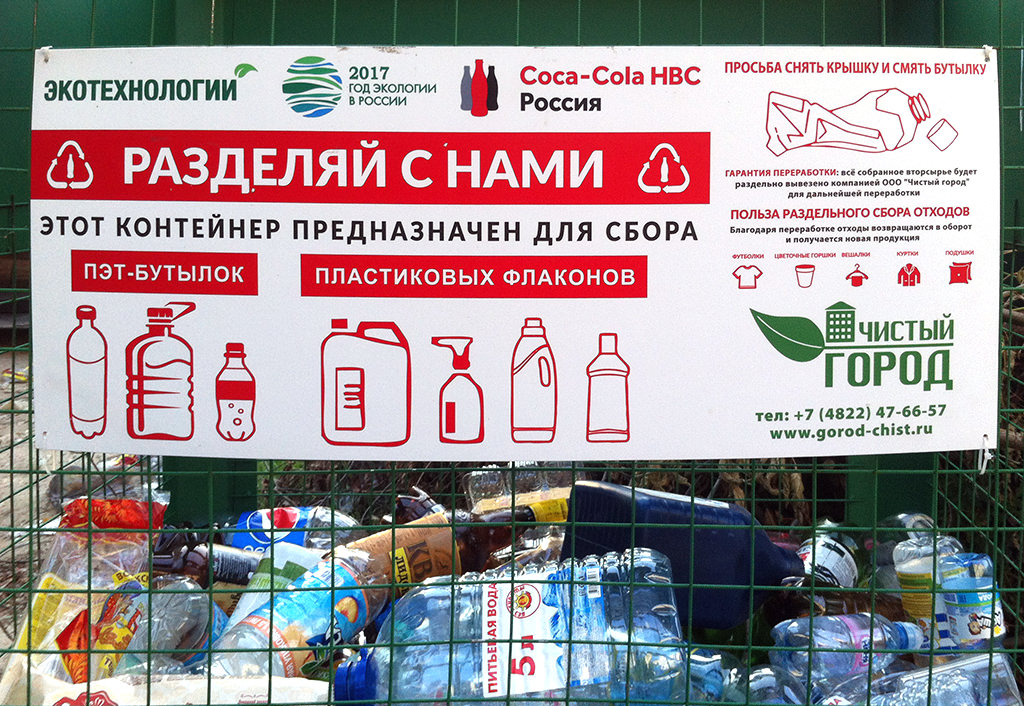 One of the biggest culture shocks I’ve had in Russia is the (almost) complete absence of recycling. The only recycling I’ve found prior to 2017 was a series of small volunteer-based (I believe) organizations that leave containers outside of building entrances to collect batteries and then come and take away on a semi-regular basis.
After living all my life in different countries, but always in the “West”, it really was disheartening to always see plastic, aluminium, paper and glass all going into the same trash can without any recycling being planned at all for them.

Sometimes in the last few years some special trash cans started appearing, especially in railway stations, airports and other touristic places. They have three top covers, labeled for different materials (usually paper, plastic and metal, and non-recyclables), but the sad truth is that, more often than not, under those covers there is one single large trash bag.

According to data from the Moscow Natural Resource and Environmental Protection Department dating all the way back to 2011, that year the Russian capital collectively produced 2.9 million tons of solid trash, of which only 27.6 thousand tons (less than 1%) was recycled. Of these the vast majority was paper (24.000 tons) and the rest comprised plastic bottles (1.5 tons) and glass (1 ton only).  Not much has gotten better since then and in 2016, according to Greenpeace, Russia’s landfills covered a total area equal to the size of Switzerland, which is more than 41,000 square kilometers.

There seems to be a light, however, at the end of this tunnel: new amendments to the federal law, “On Production and Consumption Waste,” took effect on Sept. 26. Each region now has to decide how to deal with waste — to sort and recycle it, send it to a landfill, or incinerate it. Federal funding will depend on the implementation of such programs.

The Plarus plant near Moscow is Russia’s only facility that practices a bottle-to-bottle system. This means that the company creates new plastic bottles from used ones. You can endlessly recycle a bottle into another one.

Coca-Cola Russia is one of the plant’s biggest customers. This, finally, explain the title of this post and this new culture shock of mine. I’ve recently noticed the appearance of new large “trash cans” (actually they are more like trash “cages”) to collect plastic bottles even outside of Moscow and they are sponsored by Coca-Cola!

This is the first time in my life that I see “sponsored trash cans“. I’ve seen trash cans around the world that showed advertisement on the various sides, but this is different. The sponsor’s name is right up there with the instructions on what to put in the trash can and a list of the benefits coming from the recycling process.

Please note that I am NOT AT ALL against this “sponsorship”, I was just shocked to see it, as I had never seen anything of the sort before in my life.

What do you guys think about it? I would love to hear your opinion in the comments!