So, it would seem that Russian pizza chains don’t watch Dr. Sheldon Cooper’s “Fun with flags” (from the TV sitcom The Big Bang Theory), but they should. Let me tell you how I came to that conclusion.

A little while ago I was taking some pictures (no surprise there) around Moscow’s Kremlin and the Red square when I decided to stop and grab a bite to eat. It was already pretty late at night and therefore the choice of places that were still open was meager. My wife and I entered the food court overlooking the Fairy Tale and War Heroes Statues on Manege Square (about which I talked in a previous post). There I noticed that one of the fast-food chain restaurant had a lot of black patches on its posters on the walls. And I do mean a lot.

Getting closer to those posters, I could immediately see why they wanted to hide the logo!

There were SO MANY mistakes and errors on those prints that my question was not why they covered the logo, but rather how could they have printed them and hung them on the walls in the first place!

I already wrote a post about the lack of proofreading in Russia, but this really took the cake.

First of all, the Hungarian flag is everywhere. In the picture above (sorry for the nasty flash reflection, i took it in a hurry) you can barely see that they painted over the writing “Sbarro” on the white part of the Hungarian flag, to hide some of the shame.

Most important of all, that is obviously also NOT the correct “Sbarro flag”

You can see one more example of one of the many mistakes I found in the feature image of the post, but it is rather hard to see (bonus points if you already saw it!). 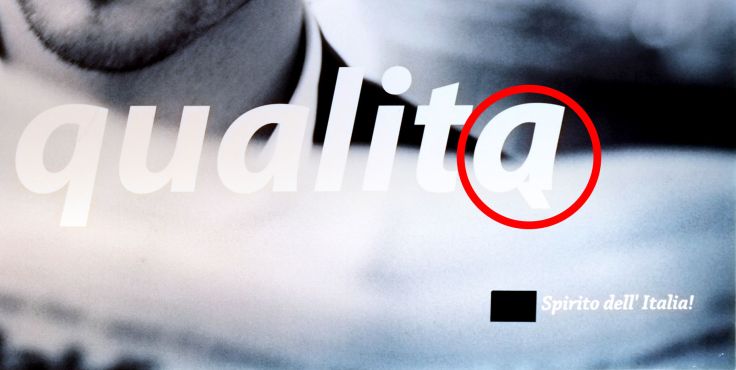 I find this delightfully ironic: they misspelled the word “quality” (Qualità, in Italian) by deciding to put the final accent of the word UNDER the “a” instead of over it….

What comes as a shock to me is how these things can happen in a large corporation, where tons of people should be supposed to check for mistakes and how no one noticed before putting these posters up in a location so central and so prestigious that it probably costs a bazzilion dollars to rend every month….

What do you guys think? I would love to hear your opinion in the comments!