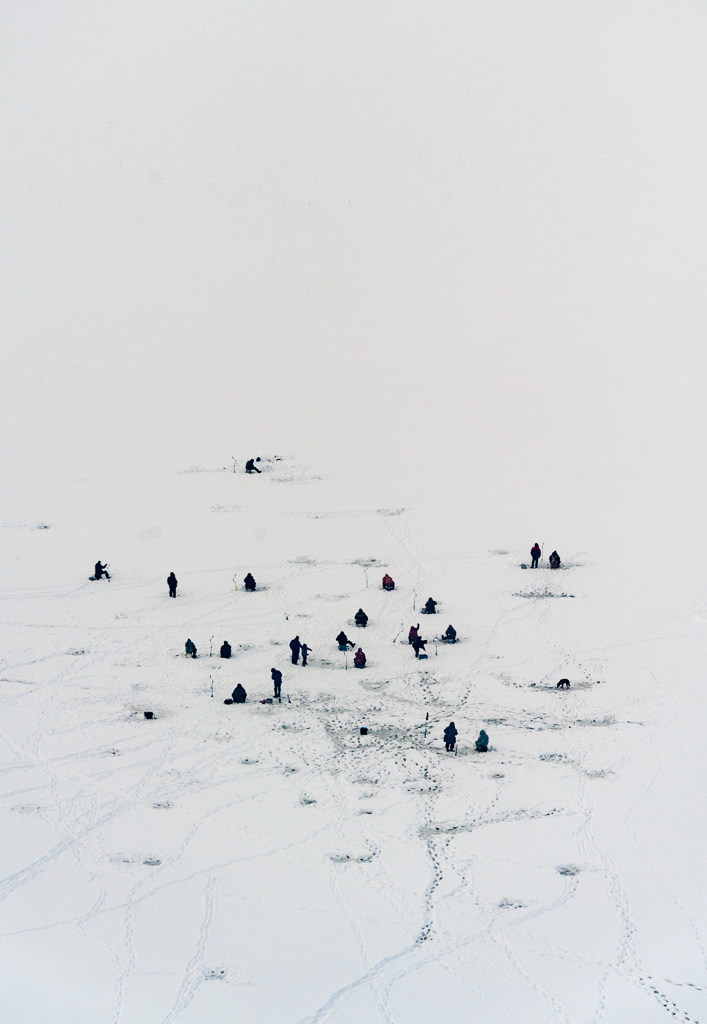 The Nizhny Novgorod Cableway  is a 3660 metres long gondola lift cable car link across the Volga River in Russia connecting the city of Nizhny Novgorod with the town of Bor, inaugurated  in February 2012.

It is part of the city’s public transport system, so you can ride it for a very low price (around 1.5 Euros or USD for a round-trip). Compare that, for example with the London Cable Car, which costs around 10 Euros – 12 USD for a shorter ride!

A trip on the Nizhny Novgorod Cableway lasts 13 minutes (each way) and the most spectacular part id without a doubt the crossing over the Volga River in a 900 metres long span on two 82 metres high masts.

During winter it is very common to see groups of ice-fishermen gathering every day on the frozen Volga and from the height of the cable car you get a pretty unique perspective, making them look like small ants.

Photo Tip!
Because the snow-covered river is so white, when you photograph the fishermen from above you also see an incredible contrast and get a black-and-white looking picture. To achieve the result you want it is paramount that you shoot in RAW format, because your white balance will be completely thrown off by the fact that the cable car windows are tinted and therefore “out of camera” you get a very bluish looking image. If you shoot in RAW it is very easy to change the white balance in post-production (Adobe Camera Raw, Lightroom, Phase One’s Capture One, DXO Optics and so on) without any loss of quality or dynamic range. With most cameras you will also get an under exposed image if you use “auto mode” or “auto exposure”, as the camera is “blinded” by too much white and tries to obtain some midtones in the image by underexposing. Again, with modern cameras if you shoot RAW it is then easy to boost up the exposure and correct contrast afterwards.

Nizhny Novgorod, usually colloquially shortened to Nizhny, is located about 400 km east of Moscow, where the Oka empties into the Volga and it is one of those places where I once knew I could never go.

The city was founded in 1221 by Prince Yuri II of Vladimir. From 1932 to 1990, it was known as Gorky, after the writer Maxim Gorky, who was born there. During the Soviet period, the city turned into an important industrial center, in particular thanks to the Gorky Automobile Plant. Because of it, the city was given the nickname “Russian Detroit“. During the World War II Gorky became the biggest provider of military equipment to the front. Due to this, the Luftwaffe constantly bombed the city from the air. Although almost all the production sites of the Gorky Automobile Plant were completely destroyed, the citizens of Gorky reconstructed the factory after 100 days. After the war, Gorky became a “closed city“ and remained one until after the dissolution of the Soviet Union in 1990. At that time the city was renamed Nizhny Novgorod once again.

Today Nizhny is a lovely city to visit, and I’ve already talked about one of my favourite places in town in a previous post.