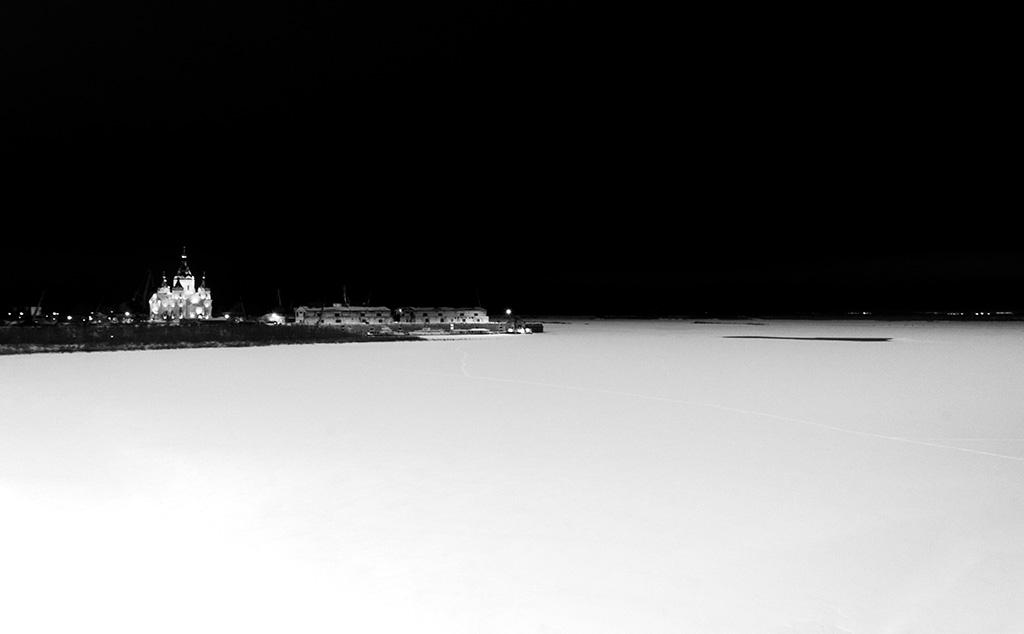 Coming from the warmer climate of Italy, my native country, I am still very much fascinated by the frozen rivers of Russia. Especially the large and very large ones, like the Volga, which turn completely white in winter once they are covered in snow.

If you’ve been reading this blog, you also know I am deeply intrigued by the possibility of visiting Russian cities and regions that were once completely off-limits to foreigners (and to most Russians, as well) under Soviet Union law. The picture above combines both of this element and maybe that is why it means a lot to me.

Nizhny Novgorod, usually colloquially shortened to Nizhny, is located about 400 km east of Moscow, where the Oka empties into the Volga and it is one of those places where I once knew I could never go.

The city was founded in 1221 by Prince Yuri II of Vladimir. From 1932 to 1990, it was known as Gorky, after the writer Maxim Gorky, who was born there. During the Soviet period, the city turned into an important industrial center, in particular thanks to the Gorky Automobile Plant. Because of it, the city was given the nickname “Russian Detroit“. During the World War II Gorky became the biggest provider of military equipment to the front. Due to this, the Luftwaffe constantly bombed the city from the air. Although almost all the production sites of the Gorky Automobile Plant were completely destroyed, the citizens of Gorky reconstructed the factory after 100 days. After the war, Gorky became a “closed city“ and remained one until after the dissolution of the Soviet Union in 1990. At that time the city was renamed Nizhny Novgorod once again.

Today Nizhny is a lovely city to visit, and I’ve already talked about one of my favourite places in town. Today’s picture was actually shot not far from there, on the Kanavinsky Bridge crossing the Oka river and overlooking the Volga.

The sky was overcast and reflected the city lights from below, turning into a muddy and unpleasant colour. That means I already knew I would turn this picture in black and white. The older ones among my readers will still remember, as I do, the “old times” when, shooting film, you actually had to decide if you wanted a color or black and white image before taking it and select the appropriate king of film for your camera. Today I find it so much more convenient that you shoot with just one sensor and can decide afterwards whether you want your picture to be in color or black and white. Of course you could print your color negative in black and white even in the film days, but it would come out very “greyish”and with very little contrast, unless you put A LOT of work into it. The only reason to shoot “black and white only” today is if you want the absolute maximum resolution possible and buy a black-and-white only camera where each pixel in the sensor captures luminosity detail and doesn’t then have to be interpolated to create the color image. The absolute peak of this kind of cameras is Phase One’s IQ3 100MP Achromatic, which will set you back in excess of 50,000$ (yes, fifty thousand US dollars!) but will reward you with 100 Megapixel goodness.

But I digress. The bridge actually has very strong floodlights illuminating the river below and I soon realised that, in order not to overexpose the foreground, the sky would turn out pitch black anyway.

Photo tip!
I like the fact that the picture is divided in half between the white bottom part and the black top, with some grey elements in the middle. But what I really like (and what I suggest you to always look and compose for in this kind of images) is that there is a little white element “going into the black” on the left and a little, almost symmetrical black element into the white on the right.

I like this because I always tend to like broken symmetry in pictures, but in black and white ones especially I find this kind of juxtaposition reminds me a lot of the yin and yang (even if turned 90 degrees to the side).