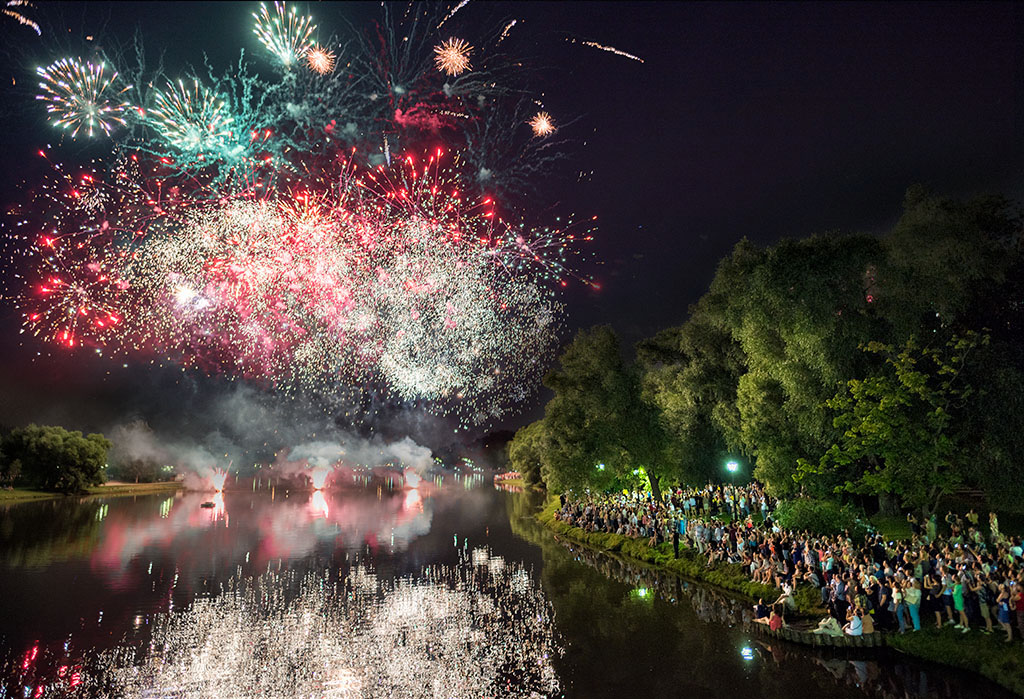 It is not easy to determine the “birth day” of a city whose history is much longer than the recorded (written) history of mankind! The oldest evidence of humans on the territory of Moscow dates from the Neolithic (Schukinskaya site on the Moscow River). That means that people have been living here for longer than 5.000 years, maybe longer than 10.000 years. Within the modern bounds of the city other late evidence was discovered (the burial ground of the Fatyanovskaya culture, the site of the Iron Age settlement of the Dyakovo culture), on the territory of the Kremlin, Sparrow Hills, Setun River and Kuntsevskiy forest park, and others.

In regard to Slavic people, the ancestors of today’s Russian majority of citizens,the earliest East Slavic tribes recorded as having expanded to the upper Volga in the 9th to 10th centuries are the Vyatichi and Krivichi. The Moskva River was incorporated as part of Rostov-Suzdal into the Kievan Rus in the 11th century.

The first known reference to Moscow dates from 1147 as a meeting place of Yuri Dolgoruky and Sviatoslav Olgovich. At the time Moscow was a minor town on the western border of Vladimir-Suzdal Principality. That is why the year 1147 was chosen as the official date from which to count Moscow’s years. And that means that this year the Russian capital turns 870. Pretty impressive for a country that is only 27 years old (check out the post about it)!

Traditionally the city’s birthday or “Moscow City Day” was celebrated on the first saturday in September, but the date was moved to a week later since last year, as in 2016 it would otherwise coincided with the 10 years “anniversary” since the Beslan school hostage tragedy. Alredy in the spring Moscow’s major announce on his official website that this year the celebration will take place today: September 9th.

In his announcement the Major specified that this time “It is a round anniversary, 870 years”. When people (and cities) turn a round number in Russia it is considered a very special birthday and there is even a special name for it: ЮБИЛЕЙ (literally Jubilee, even if the meaning of the English word is a bit different).

Overall more than 1,000 different events and activities will take place to celebrate the occasion. Amongst them parades, fairs, street entertainments, sports contests and live music concerts. Important venues for these events will be the great city parks (like Kolomenskoe and Tsaritsyno) and the celebration will culminate in the evening with a firework display launched from several locations.

Photo tip for fireworks!
When you take pictures of fireworks it is pretty easy to be disappointed with your results, if you don’t know how to employ a simple trick or two. With your eyes you see the sky filled with the vibrant flickering light of the fireworks, illuminating everything with ever changing color glows. But then your camera only records a few lame light streaks in otherwise abslote darkness, or a colorful scenatio, but in which the sky is completely blown out and appears almost all white.
One trick you can use is that of creating an HDR image by merging more than one exposure in dedicated software. I will not go in depth on HDR images here, because this is NOT the technique I’ve used for the feature image of this post, but you can read a detailed article on it, if you are interested, in Wikipedia, or follow HDR Guru and master Trey Ratclif who was “propelled to fame” 10 years ago exactly with an HDR picture of fireworks he took in 2007 with which he won the Annual Smithsonian Magazine Awards… 🙂
The technique I used is simpler. A lot longer to explain, but actually very easy to implement. And you can even get pretty good results without a tripod. First take a picture of the kind wehere the exploding fireworks are definitely over-exposed, but the foreground looks nice. I suggest you take this picture FIRST for a number of reasons. First of all it is the trickiest. You can not rely on “auto exposure” on your camera. Unless you are very, very good at evaluating low light, it will take you a few tries before you get it right. Wether you are using a tripod or not, if you have a wide angle lens the minimum shutter speed you can use will be likely limited by the movement of people (or trees if it is windy) and I suggest you never go below 1/15th of a second. For this picture I shot at 1/20th. Use the brightest wide angle lens you have and shoot full open, rising ISO value as needed to get the exposure you are looking for.
You should get a picture with a nice foreground and a sort of unpleasant light blob in an otherwise black sky. The other reason why you should get this picture FIRST is that, as a rule, fireworks shows get better and better as they progress, leaving you with the most spectacular fire works for your other shots.
Now you can either manually lower your ISO and shutter speed or even (gasp!) go back to auto exposure (don’t listen to those purists who tell you that auto mode is never useful!) especially if you have a good modern camera capable of not burning the highlights and take pictures of the fireworks you like. They will be properly exposed for the light (if they are over exposed, go back to manual mode and decrease the shutter speed or tell your camera to under-expose every shot in auto. This, too, might requires a few tries before you get a good result) and the rest of the image will be extremely dark, if not all black. That is fine.
For the last step you need Photoshop (or another program that manages layer and fusion methods).
Open the first image (the one with the good foreground) and just paint black over the blob of light in the sky. Now open the first of the properly exposed firework images you like, copy it all and paste onto the first image. Photoshop will put it in a new layer. Now go to the layer panel (if you don’t see it go to menu “window” and select “layers”. In the layers panel the upper one should already be selected by default (you can see white corners around its miniature, left of its name). If it is not just click on it. Then over the list of layers, click on the word “Normal”. A drop down menu appears and you select “lighten” (about one third of the way down). Now magic happens and you see your firework over the black sky of the first image. If the firework does not appear where you would like it to be, you can move it around untill you find a “suitable placement” and if you want to “erase” any part of it you can create a layer mask (or if you don’t know how to create a layer mask, just paint black over the part you don’t like and it will magically disappear from your photo).
Repeat the process for as many firework shots as you like to combine them all in a single image, untill you are happy awith what you see and the sky doesn’t look unnaturally full of fireworks. For the image you see in this post (which I took a few weeks back in Tsaritsyno park) I’ve used an exposure for the foreground and three for the fireworks.
I am sure that if you followed these instructions step-by step you will agree with me that it is much harder to explain this process than to actually use it!