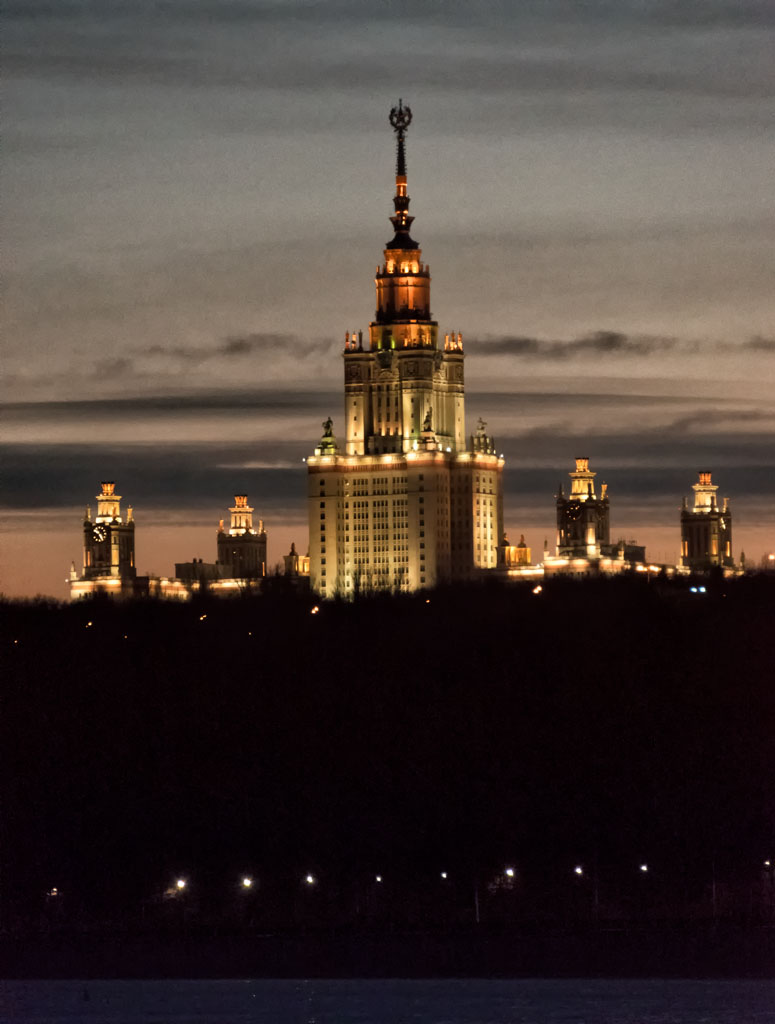 When you read “Seven Sisters”, what’s the first thing that comes to your mind? If you are a student of Greek Mythology you might think about the Pleiades. If you were already born in the 1970s and lived through the 1973 oil crisis, it is most likely that you immediately picture in your mind the or cartel of oil companies, which dominated the global petroleum industry from the mid-1940s to the mid-1970s. Seven sisters is also a popular expression to indicate a group of seven skyscrapers in Moscow designed in the Stalinist style and built from 1947 to 1953, in an elaborate combination of Russian Baroque and Gothic styles. Interestingly, though the term “Seven Sisters” is neither used nor understood by the local population; Muscovites call them Vysotki or Stalinskie Vysotki, meaning “(Stalin’s) high-rises” (or “Stalinist skyscrapers”).

The construction of the first Soviet skyscraper project, Palace of the Soviets, was interrupted by the German invasion of 1941, at which point the steel frame was scrapped in order to fortify the Moscow defense ring, and the site was abandoned. The leading Soviet architect, Boris Iofan presented six new drafts for this site, but they were all rejected. In 1946, Stalin personally switched to another idea: construction of vysotki, a chain of reasonably-sized skyscrapers not tarnished by the memories of the Comintern. This is as Nikita Khrushchev recalled Stalin’s words:

“We won the war … foreigners will come to Moscow, walk around, and there are no skyscrapers. If they compare Moscow to capitalist cities, it’s a moral blow to us”

All the buildings employed over-engineered steel frames with concrete ceilings and masonry infill, based on concrete slab foundations (in the case of the University building — 7 meters thick). Exterior ceramic tiles, panels up to 15 square meters, were secured with stainless steel anchors. The height of these buildings was not limited by political will, but by lack of technology and experience — the structures were far heavier than American skyscrapers.

The effect of this project on real urban needs can be seen from these numbers:

In other words, the resources diverted for this project effectively halved housing construction rates. On the other hand, the new construction plants, built for this project (like Kuchino Ceramics), were fundamental to Khrushchev’s residential program just a few years later, but we will talk about Khrushchyovki in another post!

The highest and most iconic of the Seven sisters sits on top of Moscow’s Sparrow Hills and since its inauguration it serves as the headquarters of the Lomonosov Moscow State University. The main tower, which consumed over 40,000 tons of steel for its framework and 130,000 cubic metres of concrete, was inaugurated on September 1, 1953. At 240 metres tall, it was the 7th tallest building of the world and also the tallest in Europe. Its European record lasted up to 1988 (when it was surpassed by MesseTurm), but it is still the tallest educational building in the world. To underline just how Stalinist this building was, suffice to say that it was constructed in part by several thousand Gulag inmates. When the construction was nearing completion, some inmates were housed on the 24th and 25th levels to reduce transportation costs and the number of guards required.

The Moscow State University building became one of the most recognisable symbols of Moscow, to the point that its silhouette became the symbol of the 1980 Summer Olympics in Moscow.

It was also the tallest building in the USSR, first, and in Russia, later, for an astounding 52 years: from its completion in 1953 all the way to 2005. It is worth noting that the building that finally broke this record “pays homage” to the Moscow State University building. The 57-storey Triumph Palace is the tallest apartment building in Moscow and all of Europe. It is sometimes called the Eighth Sister because it is similar in appearance to the Stalin’s skyscrapers .

Would you like to take part in a photowalk or a photo tour of Moscow or any other Russian destination with an English (and Italian, Spanish and French) speaking guide (me and my wife) showing you the sights and telling you a bit about Russian history and traditions? If so, do get in touch and we’ll be happy to create an unforgettable, tailor-made experience for you!

5 thoughts on “Moscow State University: the first of the Seven Sisters”