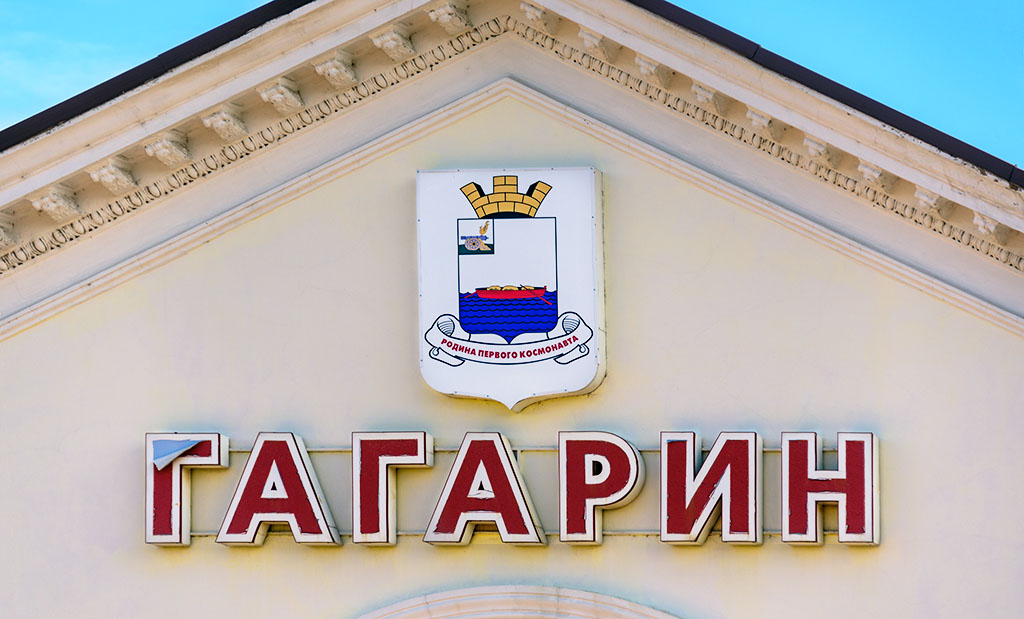 About half way through the four hour journey from Moscow to Smolensk, the Lastochka train stops in a little sleeping town of some 30.000 people. There is no imposing building and this might seem like any other stop along the way, but the name of the town gives away that there is something historically significant going on.

If you can read Cyrillic, you will already have noticed that the town’s name is Gagarin, in honour of the first human to journey into outer space: Yuri Alekseyevich Gagarin or simply Yuri Gagarin. The Soviet cosmonaut was born on March 9th, 1934, in the nearby village of Klushino and after his death in 1968 (when the MiG-15 training jet he was piloting crashed) the city was renamed in his honour (and I suspect, but that’s just my speculation, also because the former name of Gzhatsk – Гжатск – was all but unpronounceable!). The city emblem (under the drawing of a rowing boat on a river) also states that this is the birthplace of the first cosmonaut. The whole district, of which the town is the administrative center, was actually renamed Gagarinsky District.

The first thing I want to point out is that if you have never lived in a climate as harsh as that of Russia in the winter, it might be easy to think that the sign has been neglect for who knows how long and it’s restoration in overdue. The fact is that after each punishing winter pretty much every building (and road) needs a bit (or a lot) of upkeep and I happened to take this picture at the beginning of spring, when the “yearly restoration” hadn’t yet started. Now, this is not to say that in summer everything in Russia is magically fixed and there is no derelict building at all, but just that one can hardly come to a conclusion about the care that is being put in keeping a place tidy from a single picture. I hope it makes sense.

On 12 April 1961, the Vostok 3KA-3 (Vostok 1) spacecraft with Gagarin aboard was launched from Baikonur Cosmodrome. Gagarin thus became both the first human to travel into space, and the first to orbit the Earth.

The radio communication between the launch control room and Gagarin included the following dialogue at the moment of rocket launch:

Korolev: “Preliminary stage….. intermediate….. main….. lift off! We wish you a good flight. Everything is all right.”

Gagarin’s informal poyekhali! became a historical phrase in the Eastern Bloc, used to refer to the beginning of the Space Age in human history.

Aside from his short stature at 1.57 metres (5 ft 2 in), one of Gagarin’s most notable traits was his smile. Many commented on how Gagarin’s smile gained the attention of crowds on the frequent tours he did in the months after the Vostok 1 mission success.

Gagarin also garnered a reputation as an adept public figure. When he visited Manchester in the United Kingdom, it was pouring rain. However, Gagarin insisted that the convertible top remain down so that the cheering crowds could catch a glimpse of him. Gagarin stated, “If all these people have turned out to welcome me and can stand in the rain, so can I.” Gagarin refused an umbrella and remained standing in his open-top Bentley so that the cheering crowds could still see him.

A similar approach recently made the news in June 2017 when Russian president Vladimir Putin stood in the pouring rain, refusing an umbrella, during a wreath-laying ceremony marking the anniversary of the Nazi German invasion in 1941, in front of the Tomb of the Unknown Soldier by the Kremlin wall in Moscow.  A few days later during an interview with school children he was asked why he did not want an umbrella in that downpour and this was the president’s answer:

“As for me, it never occurred to me [to ask for an umbrella]. You know, war is not just about blood and death, no matter how sad it may sound. Of course, there is both blood and death, and they are part of the horrors of war. But, among other things, war is also about hard work. The troops either advance or retreat, and they are in the field all the time, during the day, at night, in the summer, in the winter, in the snow, and in the rain. They never catch a break. They do not go home when their fighting day is over. They live and die in the field. This is a terrible situation. So, it did not even occur to me that I could grab an umbrella at the very moment when the wreath was laid. Indeed, it was raining heavily, but I did not think about it. I did not make a decision to do something in particular. It simply did not occur to me that I could do something differently. I believe that this is normal. We are not made of sugar, we will not melt.”

One thought on “Gagarin’s glory”