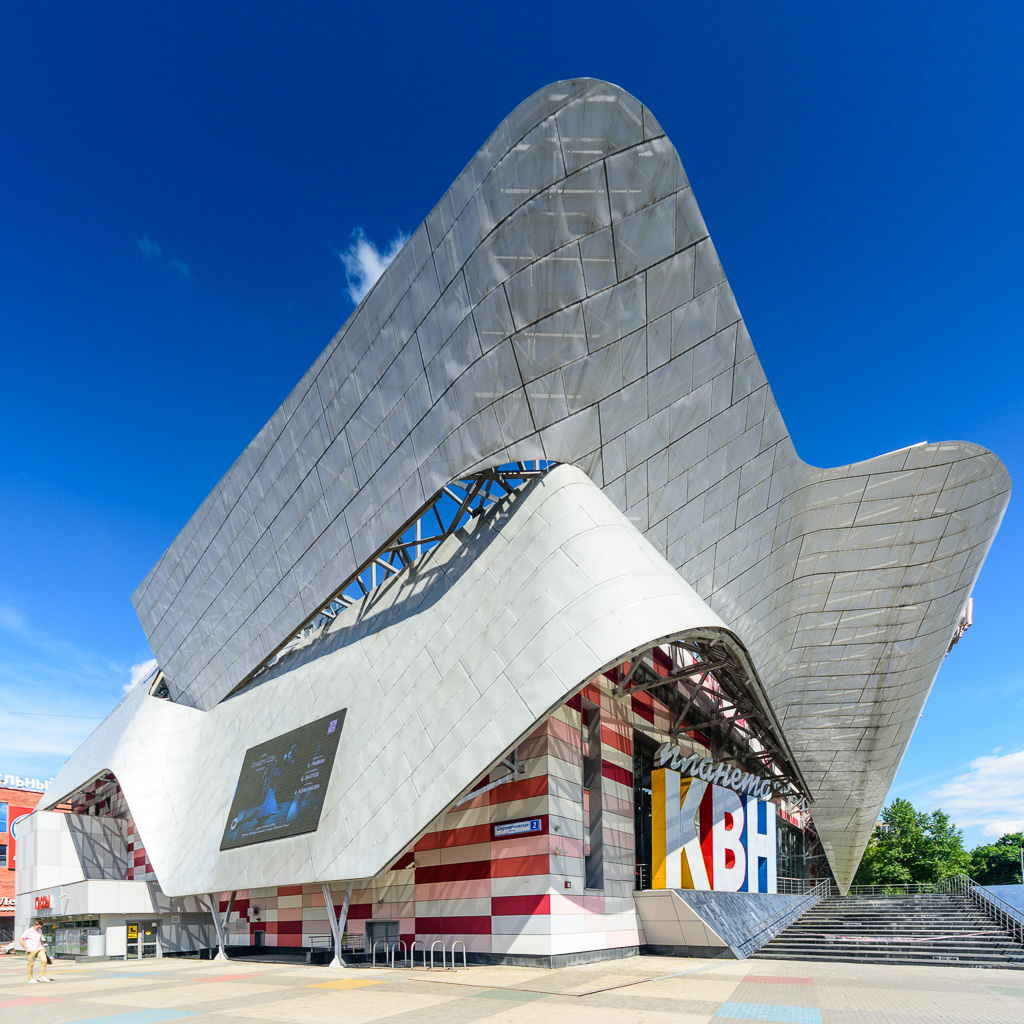 I don’t think that Gehrysh is a real word. Actually, I am pretty sure it isn’t. And it should not be confused with “garish”, which the Oxford dictionary defines as: “obtrusively bright and showy; lurid” and definitely does not apply to the Planeta VKN Youth Center building in Moscow.

To me the word Gehrysh should convey a sense of “in the style of architect Frank Gehry and I believe that the flowing architecture of the Planeta VKN is an homage to Gehry’s Guggenheim Museum Bilbao. The reasons why this look won the the architectural contest for the reconstruction of the facades of “Havana” Movie Theater are actually more complex and interesting than just the will to have a building in Gehry’s style in Moscow. The former “Havana” was a reserved-looking representative of the late modernist style with a characteristic classicism twist to it and a balanced view of the avenue. Now it is a flowing whirlwind that is caressing, embracing, and by no means static.

«One of our goals was to reconsider the town-planning meaning of this building in today’s situation – explains Vera Butko, of the architecture study Atrium  – This movie theater used to “look” over Suschevsky Val, while what we did was reorient it to overlook the crossroads that has turned into a busy square recently. Not so long they got a new “Maryina Roscha” Metro station here. Ultimately, what we did was turn the corner standpoint into the main one – as a response to the Soviet-era residential building that stands diagonally across the road».

The three big letters you see on the front of the building are actually not “KBH” as one instinctively reads them in English (or Latin alphabet), but they are the Cyrillic letters KVN. They stand for Klub Vesyólykh i Nakhódchivykh or Ka-Ve-En, which translates into “Club of the Funny and Inventive”. This is a Russian humor TV show and competition where teams (usually college students) compete by giving funny answers to questions and showing prepared sketches. Over the years the TV show became so popular and successful that it “acquired” its own theatre. This is important to know, because according to the Atrium architects the two giant bands of flowing outlines that at some places considerably break away from the walls are supposed to change the box of the former movie theater beyond recognition turning it into a shape reminiscent of a carnival mask.

Photo tip: when there is not enough room to walk away from a building you want to photograph without foreign elements entering into the frame and partially blocking the view, not even an ultra wide wide-angle (in this case a 12mm on full frame) can be enough to encompass the whole building without having to tilt your camera upward and, thus, getting skewed vertical lines. In this case I suggest to take two pictures: one with the camera level, to get the correct proportions of the building and to keep vertical lines nice and straight, and the second to include the elements on the top that were left out of the first picture. You can then combine the two pictures in a variety of software (for instance: Adobe Lightroom or the fantastic Autopano Giga by Kolor (in both case you can choose the kind of projection you want and experiment with a wealth of different options) or try the one-click simplicity of Double Take if you are on a Mac. Of course this is a bit more complicated than shooting just one picture, but I do feel that it provides better (and overall sharper) results than just keystone correction, as a large part of the final image comes from the undistorted and uncorrected first picture.

Would you like to take part in a photo tour (or have one organised just for you) and discover interesting places in Moscow, Saint Petersburg or other Russian cities that tourists almost never get to? If so, do get in touch and we’ll be happy to make it happen!

2 thoughts on “The very Gehrysh Planeta KVN in Moscow”