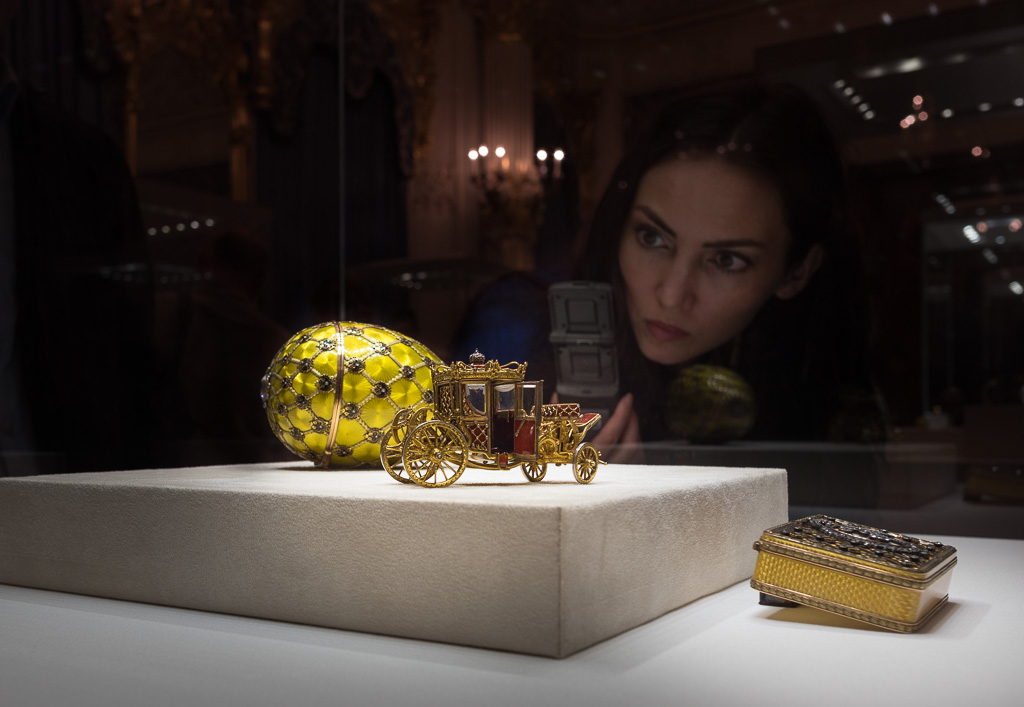 With over 100 museums to choose from, Saint Petersburg really has a lot to offer for any taste. One of the undisputed gems in the Venice of the North museum crown is the Fabergé Museum. This is a privately-owned museum established by Viktor Vekselberg and his Link of Times foundation in order to repatriate lost cultural valuables to Russia. It contains more than 4,000 works of decorative applied and fine arts, including gold and silver items, paintings, porcelain and bronze and the seat of the museum is a sight in itself: the Shuvalov Palace.

One post only could certainly never hope to cover all the breathtaking wonders of the museum, so for today we’ll focus on a single highlight of the museum’s collection: the group of nine Imperial Easter eggs created by Fabergé for the last two Russian Tsars and in particular on the Coronation Egg, pictured above.

This, perhaps Faberge’s most iconic egg, was presented by Emperor Nicholas II (the last Emperor of Russia) to his wife, Empress Alexandra Feodorovna, as a memento of her entry into Moscow on May 26th, day of their Coronation in the Uspensky Cathedral. Its outer shell is made of multi-coloured gold, embellished with translucent yellow guilloché enamel and black enamel double-headed eagles set with diamonds, a design recalling the heavy Cloth of Gold robe she wore at the ceremony. The jewelled monogram of the empress appears at the egg’s apex under a portrait diamond, with the date at the base. The egg opens to reveal a surprise in the form of a diamond-set enamelled gold miniature replica of the original 18th century carriage by Buckendahl which once contained an emerald drop, later replaced by a yellow briolette diamond (both eventually lost). The 9.4cm (3 11/16 in.) coach took craftsman, Georg Stein 13 months to complete.

Photo tip! The Fabergé eggs are, of course, under glass, like many artefacts in museums all around the world. This kind of thick glass, combined with spotlights illuminating the art piece, creates an endless series of reflections from all angles, the likes of which you can not get rid of, even with a polarising filter. So there is pretty much no way you can walk away with one of those museum store quality photos, with the subject standing out neatly and cleanly on a creamy neutral background. Or maybe you can if you don’t mind spending a considerable amount of hours fiddling with the clone stamp. The pictures you see in art and museum books are taken in different and controlled light conditions. What I think you should do, on the contrary, is to show the “environment” where the artefact is displayed, maybe including the people looking at it in awe. I think it also really helps to avoid the all-too-classic and overseen 45 degrees angle from the top. Try to get a different perspective, to shoot from the same height as the object you are photographing. You might get more interesting results. For instance here you can see a young visitor enraptured by the egg and chariot combo, holding what might look like a Soviet version of the StarTAC, but is actually a museum audio-guide.

Would you like to take part in a museum photo tour in Saint Petersburg or Moscow or any other Russian city, or to have one organised just for you? If so do get in touch and we’ll be happy to make it happen for you!