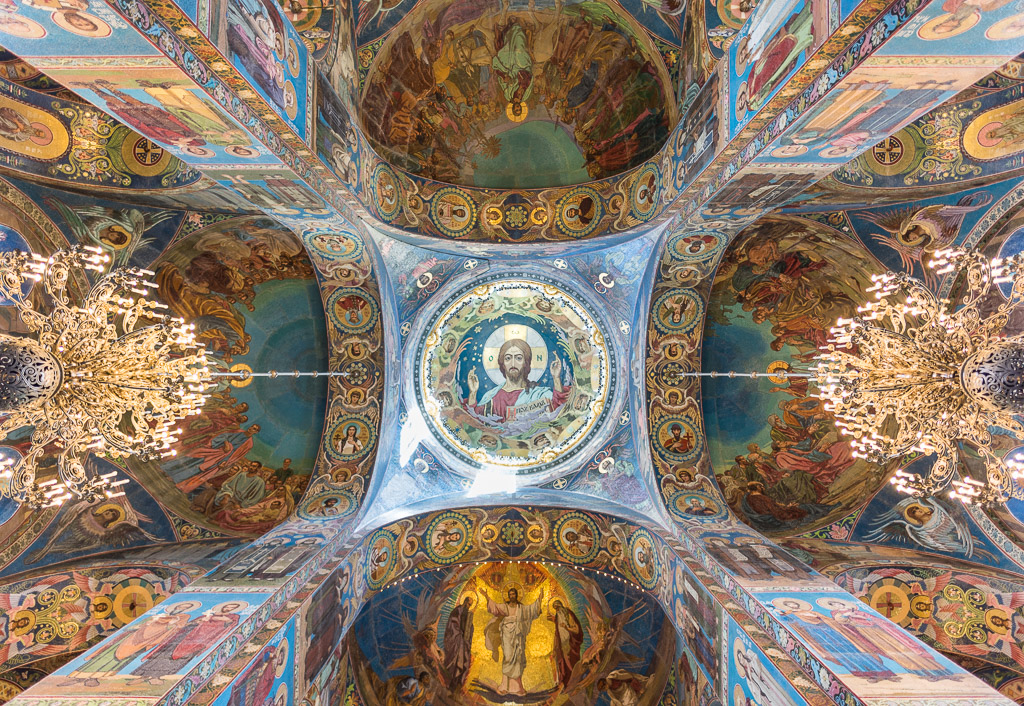 I usually advocate the merits of avoiding tourist-traps, exploring and travelling off the beaten track. I must admit, though, that there are must-see places that you really must see when you travel to a new city. Saint Petersburg offers a number of those and the one you see in today’s picture is the interior of the Church of the Savior on Spilled Blood.

The pretty unusual part of the name “on spilled blood” has nothing to do with yesterday’s post on Game of Thrones, but derives from the fact that this church was built on the site where the Russian Emperor Alexander II was fatally wounded in March 1881. Alexander, seen from an historical prospective, should have been a beloved king. First of all he was a pacifist (for example he joined with Germany and Austria in the League of the Three Emperors that stabilized the European situation) and Alexander’s most significant reform as emperor was that of the emancipation of Russia’s serfs in 1861, for which he is even known as Alexander the Liberator. In spite of this all, before being murdered he had already escaped five assassination attempts!

The church was built between 1883 and 1907 with a medieval Russian architecture in the spirit of romantic nationalism. The construction was funded by the imperial family. Inside contains over 7500 square meters of mosaics — according to its restorers, more than any other church in the world. The one you see pictured here is the one of of Christ Pantocrator under the central dome.

These mosaics are incredibly interesting to see as they closely resemble in style the mosaics of Ravenna, Rome and Constantinople, but they look (because they are!) so new! All the colours are brilliant, vivid, dare I say? Flamboyant. They lack that special patina that only the passing of centuries can lay on art.

Photo tip! This church, like many other in Russia, today is a museum. As such there are no religious functions and photography inside is free and welcome. Of course, due to its popularity with tourist, the church is always full of people and we all know that 99% of the times including groups of random people into interior shots instantly transform a picture into a tourist snapshot. A tripod is out of the question, as its use is not allowed (and even if it were, chances are a tourist or two would bump into int during your exposure, while they absentmindedly walk looking at the ceiling). A better technique is that of pointing your camera straight up. Even the tallest of the tourist will not be able to enter your frame. This way you get bit a more original point of view and a definitely clearer image of the mosaics, completely devoid of people’s silhouettes or even shadows. If you are using a wide angle lens, keep in mind that while I think they offer the best results in this kind of images, they are a bit tricky to use. First of all, it might take a bit of getting used to, not to feel dizzy while looking in the viewfinder, straight up, with a wide angle. Secondly, and most importantly, it is critical to have the camera as level, or straight, up as possible and to frame with care, not to have weird looking diagonal lines, an off-centre (and off-putting) vanishing point and an heavily broken symmetry.  I find it is quite tricky to properly compose this shots at first try, but luckily, unless you are still shooting film, this is no longer necessary. Take your time, check the result(s) on the screen on the back of your camera and take as many shots as you need before you are satisfied with the result, with in terms of composition and exposure. You can fix a lot in post, of course, but it is always better to get it right in camera and, besides, even if it feels like you are spending an awful lot of time to get the shot you want, in the end it will always be less time that you’d have to spend on the computer to fix a not-so-perfet one.

Would you like to discover both must-see and unusual and unexpected places in Russia? Get in touch and we’ll be happy to organise the perfect, tailor made tour for you! 🙂